You are here: The Physical World » Cool Science Dad

US science teacher Dain Kavars shares the wonder of science through fun activities. 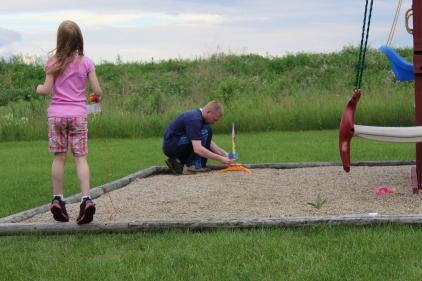 Above: Dain gets ready to set up a rocket launch.

Dain Kavars is a science teacher in Indiana, United States. He was inspired to start his blog, Cool Science Dad, when looking for fun, hands-on science activities to do with his young daughters.

He has a chat and shares some of his favourites with New Zealand Science Teacher.

Hi Dain, can you tell me about your job?

I work at the Indiana Academy for Science, Mathematics, and Humanities, a two-year residential high school for talented and gifted students. Students are in their last two years of secondary school (aged 16-18). The school serves students across the state of Indiana in the United States. I teach physics and astronomy classes, along with a research methods class. In addition, I often teach Saturday and week-long summer enrichment classes for younger students (typically aged 7–11 years).

As a science educator aware of the gender stereotypes still existing in science, I wanted to make sure my daughters were exposed to the wonders of science. I didn’t want them to grow up being left out of science simply because they are female. I had some of my own ideas for science experiments to get them involved in science, but I also spent a great deal of time searching the web for other ideas. While doing this, I thought it would be a great idea to share these experiments (along with misconceptions) to family, friends etc. The wonders of science should be shared with everyone and I decided to play my part in this. Thus I started the Cool Science Dad blog in May 2012. 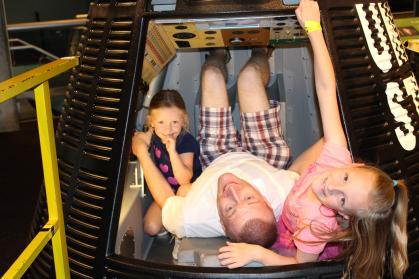 Dain and his daughters at the Great Lakes Science Center in Cleveland, Ohio. They are sitting inside a replica of one of the early U.S. space modules.

You write about experiments you and your daughters have tried at home. What are some experiments that have worked really well, and do your kids have a favourite?

Anything that does the unexpected is a favourite of my kids. The Balancing Fork experiment is a great example of this. The fork balancing the way it does goes against common sense at first glance, but it’s a great way to explore science. Other favorites include Film Canister Rockets, Burning a Dollar Bill, Magazine Friction, Candle/Air Pressure Experiment, The Imploding Pop Can, Water Bottle Rockets, and Science Experiments with Peeps.  The thing that excites me the most is my daughters are now devising their own experiments! These may not be the most elaborate experiments, but my daughters are coming up with their own ideas to test and that’s science in action! Sometimes, their ideas turn up unexpected results too. One such example of this is the Colored Snow Experiment. Their own ideas are definitely proud Daddy moments!

I like that many of your blog posts are about debunking popular ‘science myths’ i.e. that chewing gum stays in the system for seven years, or that ‘chemically sounding’ substances are terribly toxic. Why do you think myths like that linger in the popular psyche?

Misconceptions and myths are usually developed at a young age and are passed along to kids from adults (e.g. parents, teachers etc.). Most of the time, the adult is not intentionally passing along a myth. The myth is probably something she or he heard as a child from another adult. Adults are authority figures for children, so there’s no reason for a child to question the adult. Thus, the myth sticks. Once a myth sticks, it’s extremely hard to remove it. Most science misconceptions are harmless at first glance, but I’m a person who wants to know the truth and wants to pass along that truth to others, thus the reason for including misconceptions and myths on my blog. Sometimes these misconceptions can cause societal harm. For example, myths and misconceptions on climate change, GMOs, vaccines and more are causing very poor public policy choices (or the lack thereof in the case of climate change) to the detriment of society.

Have you got a favourite hands-on science experiment that a New Zealand primary teacher could do with their class?

If the teacher has the ability to take his or her class outside, water bottle rockets are a great hands-on activity. They are relatively easy to create, and kids love designing them and coming up with cool names for their rockets. In addition, I’ve never seen a child disappointed after launching the rockets. It’s a fantastic opportunity to have fun and learn some science. If the teacher doesn’t have the ability to go outside, toothpick bridges are very hands-on and breaking them is something all kids enjoy. Toothpicks can be replaced with popsicle sticks for younger children. If a teacher is looking for an experiment requiring less construction time, the Magic Ketchup Experiment, and the Floating Egg, are two examples of density experiments kids can build and test with minimal assistance.