You are here: Almost a spider… wouldn’t get a job these days though

Almost a spider… wouldn’t get a job these days though

A 305-million-year-old fossil has given scientists a three-dimensional look at an almost-spider that stalked its prey in what is now France. 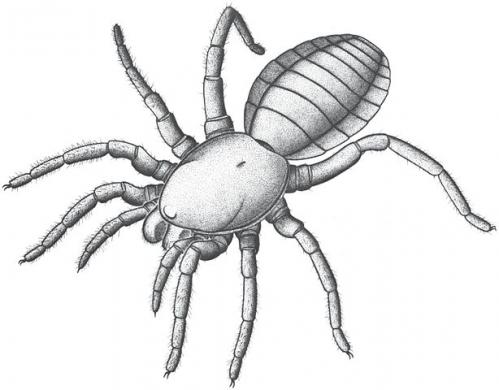 The fossil is the closest ancient relative to modern spiders that’s yet been discovered, but cannot be called a ‘true’ spider, as it lacked the skills to land it the job these days: it couldn’t spin a web to save itself.

Scientists were able to appreciate the ‘spider’ in all its glory, as the fossil was preserved in three dimensions. Using a technique called microtomography, a high-resolution form of CT (or CAT) scanning commonly used in everyday diagnostic medicine, scientists were able to generate a detailed 3D picture of the animal.

In combination with microscopic analysis, the researchers were able to examine tiny details of the creature’s anatomy. Idmonarachne brasieri lived in the same kind of habitat as modern ‘true’ spiders, and, according to an artistic visualisation at least, looked a lot like modern spiders, except that it lacked the organs modern spiders use to do that characteristically spidery thing – web spinning – called spinnerets.