It may be long extinct, but the moa has been brought back to life on the pages of a new book by Quinn Berentson. 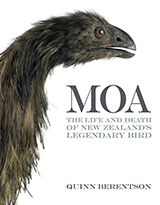 The book is Quinn’s first and tells the story of the flightless bird and the historical characters who worked to solve its mysteries. Moa was published by Nelson-based Craig Potton Publishing.

Quinn Berentson is a documentary film-maker and photographer who has produced work for National Geographic and the Discovery Channel, among others.

The Royal Society’s Science Book Prize was established in 2009 to promote and celebrate science writing in New Zealand.