New te reo Māori science resources were developed by the House of Science in Tauranga.

Science resources in te reo Māori were launched on 31 March at a special event in Tauranga. 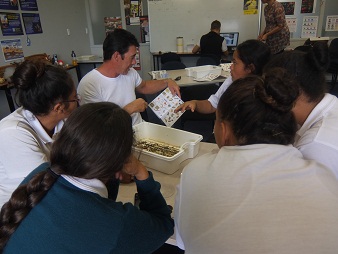 With the aim of engaging Māori students in secondary school science, the resources were developed by the House of Science as part of a wider pilot project with Priority One’s Instep programme.

The Instep programme taps into expertise from the local business sector to help students to make informed career choices.

Under the guidance of Instep Steering Group Māori business representative, Anaru Timutimu, the ‘Instep engagement with Māori’ plan was established.

This led to the development of Māori-led project ‘Ngā tikanga o te wai me te whenua’ with the guidance of local iwi and the school involved. Te Wharekura o Mauao, located in Bethlehem, Tauranga, is a Māori-medium school established by the three Tauranga Moana (Harbour) iwi.

A review of demographic and labour predictions for the Bay of Plenty in 2014 suggests that, by 2063, 25 per cent of the region’s population will be Māori – half of whom will be under 25 years of age. The recently released Bay of Plenty Tertiary Intentions Strategy notes, “In the Bay of Plenty, increasing engagement and participation of Māori youth in tertiary education is imperative to its social and economic success”.

The goal of the ‘Ngā tikanga o te wai me te whenua’ project is for rangatahi to understand their potential and the application behind the science using a land, water and cultural context.  As well as the two science resource kits, students undertake field trips to see firsthand the potential of science in the context of business and related career possibilities. So far, the students have visited Sanford’s fisheries operation and the University of Waikato’s Coastal Marine Field Station based at Sulphur Point, Tauranga.

“The students are at the centre of this project. The involvement of 38 year 11 Te Wharekura o Mauao students and their teachers, whaea Birney Ahomiro-Robinson and Matua Haydon Huriwai, has been a very important element in ensuring successful outcomes.”

Rangatahi are involved in the school’s Te Repo/wetland project, which began last year with the help of the Hawea Vercoe Commemoration Fund, which operates through the Bay of Plenty Regional Council’s Environmental Enhancement Fund. The project uses the land and water as a medium for achievement and the strengthening of identity that supports the acquisition and revitalisation of te reo Māori. It also encourages students to develop as confident, connected and actively involved lifelong learners who are embedded in their culture.

“Working together with local iwi to develop these science resources has been a fantastic privilege,” says House of Science director Chris Duggan. “Students will be engaged in hands-on, inquiry-based learning with all the equipment provided for 11 different activities. We are looking forward to continuing our relationship with Te Wharekura o Mauao as we look to expanding the breadth of bi-lingual science resources available.”

The intention is to share the two te reo Māori science resources through the House of Science, which was established at Sulphur Point in 2013 to connect and resource the local science community. The key elements for this project will be prepared by Priority One’s Instep programme and be shared with local secondary schools involved in the Instep programme.

Read more about the Priority One projects here.