You are here: Popping up with science

Popping up with science

A new initiative aims to bring science to the people, one party at a time. 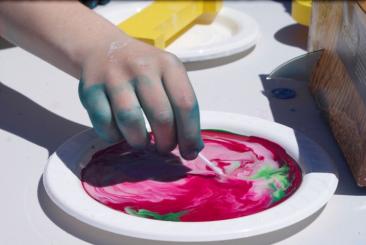 12 kilos of non-newtonian ooblek and bike pump-powered rockets made a splash near the Wellington waterfront at the start of summer.

The Pop Up science stand attracted children and adults alike, keen to add some fun science to their Sunday stroll in Frank Kitts Park. The stall hosted 500 curious visitors over the six-hour day.

Pop Up Science is a bright new initiative by science communicator and ornithologist Kimberley Collins, who was originally inspired by street food stalls.

“The idea came about in August 2014. I was hanging out with friends when I noticed a pop-up food festival and realised it would be a great thing to do with science… to take it beyond the walls of a museum or institution and actually bring it directly to people on the street,” she says.

The first Pop Up science event on November featured hands-on experiments such as purple ooblek and bottle rockets. The cost of setting up the stall, including the materials, was raised by online crowd-funding.

Deeply committed to science outreach, physics PhD student and educator Elf Eldridge came on board to help. “Elf is a very passionate science communicator, he’s always keen to help and to get children involved in hands-on science.” 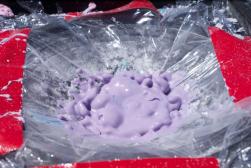 Looking forward – what’s next for Pop Up Science?

As well as offering fun hands-on science at birthday parties, Pop Up Science will set up at a Family Fun Day at Macalister Park on Sunday March 15. “The event will be nature-focused, so we’ll be encouraging families to explore ways to get out and contribute to conservation,” she says.

Kimberley says her long-term goal for the initiative is to make it financially-sustainable, and to target groups that are under-represented in STEM sectors. “I would love to see more Maori/Pacific Island students take an interest in science – and one way to fund events that target these groups could be to create DIY science kits that families could buy through our website,” she says.

“I hope that we’ll be able to create hands-on experiences that help children engage with science, technology, engineering and maths concepts.

It’s also really important that we showcase working New Zealand scientists as diverse role models - especially for young women. I want to show children that scientists are diverse and not all ‘Christopher Lloyd in Back to the Future’ types.”

Pop Up Science in the classroom

Kimberley hopes to be able to collaborate with similar organisations currently working in science education. “I don’t see the point in reinventing the wheel,” she says. “We could help with providing resources, such as a website full of experiments that are easy to do at home with everyday household items. It’s important to make science accessible! We’d also like to get them linked with The New Zealand Curriculum.”

Popping up with science
Categories