You are here: 'Kiwi Einstein' to visit Wellington

The man whose head contains the exact numbers required to represent black holes, Canterbury University’s Emeritus Professor Roy Kerr, will speak next week in Wellington about what his discovery entails, and how he got there. 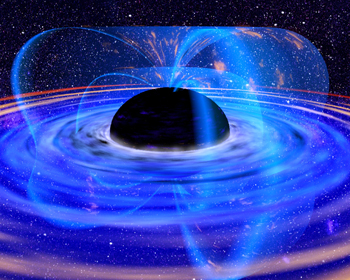 Professor Kerr was the first New Zealander to receive the Einstein Medal in 2012, and went on to be awarded the multi-million dollar Crafoord Prize earlier this year.

Roy is one of the world’s foremost mathematicians. What he achieved amounts to no less than finishing what Einstein himself started: Professor Kerr came up with the exact solution to Einstein's field equation of general relativity.

He discovered this unique solution for rotating black holes, objects so dense that even light does not move fast enough to escape, known as the Kerr metric, in 1963.

This breakthrough has been described as the most important exact solution to any equation in physics and for this discovery Emeritus Professor Kerr is considered one of the biggest names in twentieth century physics.

In his one-hour public lecture at Victoria University, Emeritus Professor Kerr will explain the mathematical research behind cracking the Einstein code, and discuss the observations of gravitational waves detected by The Laser Interferometer Gravitational-Wave Observatory (LIGO) this year.

Nobel Prize Winner and author of The Mathematical Theory of Black Holes, Subrahmanyan Chandrasekhar, wrote of Kerr’s genius saying, “In my entire scientific life, extending over 45 years, the most shattering experience has been the realisation that an exact solution of Einstein’s equations of general relativity, discovered by the New Zealand mathematician Roy Kerr, provide the absolute exact representation of untold numbers of massive black holes that populate the universe.”

The annual New Zealand Mathematical Society Colloquium held at Victoria University brings together the mathematical community of New Zealand to discuss all aspects of pure and applied mathematics and statistics.