You are here: World Soil Day 2016: soil and pulses, a symbiosis for life

World Soil Day 2016: soil and pulses, a symbiosis for life

World Soil Day 2016 this year will be marked next week, on the 5th of December. This year the theme is ‘Soil and pulses, a symbiosis for life’.

2015 was the United Nations’ International Year of Soil, in which the organisation sought to sow messages about the benefits of healthy earth. These include of course the fact that soil is the basis of food production - unhealthy soil produces food that’s not as nutritiously rich as it should be. Then there’s the fact that soil plays host to a staggering 25 per cent of the planet’s total biodiversity.

Another message that was highlighted was the fact that, while soil will happily do the hard work of feeding, clothing and housing us, we can’t just keep taking from it without giving anything back.

2016 is the UN’s International Year of Pulses, and it’s a celebration of a symbiosis that gives both to hungry soil and hungry humans: ‘leguminous’ plant species are great nitrogen fixers (species that replenish the soil with essential nitrogen), and they’re highly nutritious - a great source of protein and micronutrients, especially given the high economic and environmental cost of animal protein.

While we’re here, what’s the difference between pulses and legumes? Not a lot, according to most sources we found over the course of an exhaustive 10-minute internet search: the terms tend to be used interchangeably, but the key difference is that ‘legume’ refers to the plant itself, while ‘pulse’ refers only to the drieds seeds of a plant in the legume family. (If anybody more learned knows this to be wrong, please get in touch!) This graphic from a Canadian website might be helpful: 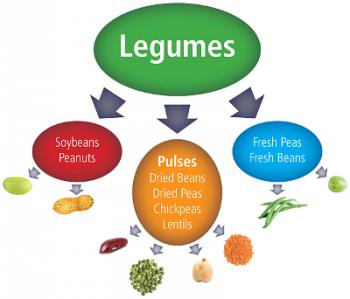 Pulses and legume species are particularly valuable to the ‘developing’ world, as a low-cost source of protein, carbohydrates, and other nutritional goodies. In the ‘developed’ world, the same species are becoming a great idea too: farming animal protein is an inefficient, and in many cases environmentally disastrous use of arable land. In fact there are all sorts of issues related to heavy reliance on meat that we’re beginning to need answers to: effluent in the water table; the dangers of increased use of antibiotics in intensive animal husbandry; not to mention health detriments. To be clear, we’re not saying that eating ANY meat is bad for you, but studies are beginning to associate overconsumption with certain health risks, including cancer.

Pulses on the other hand are little packages of nothing but goodness, yet despite the fact that they’re the central ingredient in lots of national dishes - think falafel, dahl, chilli, and baked beans - they’re a chronically underutilised resource the world over.

“Despite strong evidence of the health and nutritional benefits of pulses, their consumption... remains low in many developing and developed countries. The [International Year of Pulses] can help overcome this lack of knowledge,” said United Nations General Secretary Ban Ki Moon recently. “The International Year [of pulses] is a great opportunity to raise awareness of the benefits of pulses as the world embarks on efforts to achieve the newly adopted Sustainable Development Goals.”

Going back to the symbiotic relationship between soil and pulses/legumes: soil is a non-renewable resource, yet many modern agricultural techniques and additives are destructive to the integrity of soil, causing erosion, depletion of the water table, and leading to poor soil quality and land that becomes less arable. In fact, a horrifying 33 per cent of the world’s total arable land is “moderately to highly degraded due to the erosion, salinization, compaction, acidification and chemical pollution of soils.”

Pulse/legumes however, are a sustainable proposition, and in fact offer farmers better returns in general than more typical food crops like wheat. Growing them increases microbial activity in soil, and enrich soil biology. They’re also very tough, unlike many common food species.

Yet there has been a sharp downturn in the production of leguminous crops worldwide in recent decades, compared to cereal crops. Why this reduction has taken place is the subject of a very long and indepth study that may be out there.

The takeaway message is that pulses are (at least part of) the answer to many problems brought about by modern lifestyles and agricultural techniques, and they could play a key role in feeding a hungry world. Hopefully the International Year of Pulses can help spread the word.