You are here: Human-powered submarine has world record in sight

A human-powered submarine called Taniwha is driven by a pilot using scuba gear. 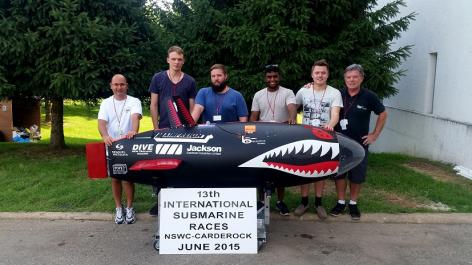 Designed and built by students and staff from the university’s Auckland Bioengineering Institute (ABI) and Department of Engineering Science, this is Taniwha’s second international outing, competing against student teams from Canada, Germany, Mexico, Netherlands, Oman, United Kingdom, and the United States. The team was the only one from the southern hemisphere.

The human-powered 3m-long submarine is made of fibreglass and weighs just 60kg. It is driven by a pilot using scuba gear, who remains submerged while using pedals to power fins to drive the sub through the water.

This year’s race was held in the United States in a 6m-deep, 1 km-long basin at a Naval centre at Carderock, Maryland where Taniwha finished first in its class (non-propeller single pilot), reaching 3.65 knots over a 100m-long dragstrip and narrowly missing a new record for a sub of its kind.

“We did really well and we got an honourable mention from the judges for innovation,” said Associate Professor Iain Anderson from ABI who travelled with the team and who has been heavily involved in the design and engineering of the sub.

“We completed 10 of 11 races so the team did a fantastic job, giving the propeller teams a run for their money and proving fin propulsion underwater is reliable and fast – just as it is for fish.”

The team will compete again next year in Gosport in southern England at the European submarine races hoping to gain that extra knot in speed to beat their own fastest time and hopefully set a new record.