You are here: The Living World » Join Hannah on a deep-sea mission

Join Hannah on a deep-sea mission

Students and teachers have the chance to follow intrepid Kiwi Hannah Prior. 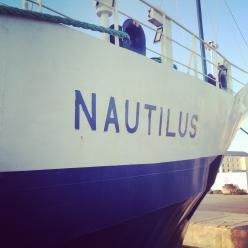 Hannah Prior is off to study the submarine volcano Kick’em Jenny, off the coast of Grenada, and you’re invited to join in.

Hannah is a programme director for the Sir Peter Blake Trust, and she will join a high-tech, deep-sea mission to the volcano from 17 September to 9 October.

The expedition, led by world-renowned explorer and the discoverer of the Titanic, Dr Robert Ballard, is the Nautilus Exploration Programme, which will focus on scientific research and exploration of the sea floor from aboard the 64-metre ship, Nautilus. Educators and students onboard represent organisations from six different countries.

The scientists onboard the vessel will use purpose-built remotely operated vehicles (ROVs) named Hercules and Argus to explore the volcanoes and sea floor.

An exciting aspect of the trip is that people at home will be able to watch a live stream of the study. The stream will be available at www.nautiluslive.org and via social media.

“It's as close to actually being there as you can get and a fantastic opportunity for students and local scientists to follow our journey, in real time, as the Nautilus is fully equipped with live video, audio, and data feeds,” says Hannah.

Kick’em Jenny is located on the Caribbean Sea floor, 8kms north off the island of Grenada. The volcano has erupted at least twelve times since 1939 and 2001, though most explosions have shown only on seismographs. The larger eruptions were detected as a low rumble underwater and from nearby islands.

Kick’em Jenny is currently overdue for an eruption, “So the scientists will certainly be on their toes during the three-week expedition,” says Hannah.

Teachers and their students are able to follow Hannah’s expedition aboard the Nautilus by visiting: http://www.sirpeterblaketrust.org/young-blake-expeditions/ev-nautilus-2014-kickem-jenny