You are here: The Living World » New tuatara book hatched

Alison Cree offers a comprehensive and fascinating look at tuatara. Her new book provides a rich resource for teaching The Living World contexts. 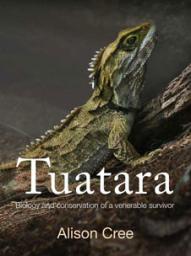 A career dedicated to native reptiles

Dr Alison Cree has been studying tuatara for all of her working life.

An author of more than 100 scientific publications (she has also studied the biology of New Zealand lizards and frogs), Alison’s book Tuatara (published by Canterbury University Press, CUP) is both a comprehensive scientific discourse on these special creatures, as well as an appealing reference book for non-scientists.

As a long-term researcher of the species, Alison, who is now an associate professor at the University of Otago, felt she had the experience to synthesise years of research and observations into a wide-reaching volume. The importance of creating a book that would appeal to a broad audience was something that developed over time.

“It would have been easy for me to write a book that was targeted solely at my academic peers, with fewer colour pictures and illustrations in it, but I felt that would reach a limited audience. I wanted to write something that was accessible to a wider range of people,” she says.

Written in mind for both comprehensive study and analysis of the tuatara’s biology and evolution, a key focus of the book is the conservation management of the reptiles over time. As such, the book will be an ideal resource for all those who work with native species – in particular, those who are involved in the management of eco-sanctuaries.

“There are many people now who are involved with the management of tuatara but may not have access to academic journals or papers, and so I thought a different approach was needed,” says Alison.

A key motivation in writing the book relates to the recent surge of interest in native species, evidenced by the development and popularity of eco-sanctuaries in New Zealand, where tuatara and other native species are free to roam in a managed environment.

The development of these sanctuaries have allowed the public to see tuatara in a way that is somewhat like being on an offshore island, albeit without the seabird community.

“The development of eco-sanctuaries, where tuatara are free to roam, is relatively new. For tuatara, establishment began in 2005 with the release of tuatara at Zealandia in Wellington. That was the first place where tuatara were released into such a large public enclosure.”

Being able to visit well-cared-for species in a naturalistic setting is heartening for many people, given our current environmental worries, says Alison.

“The time is right for people to feel that they’re part of a good news story, in terms of environmental issues. And a sense of community, team work, and national pride, too, because the release and maintenance of tuatara in eco-sanctuaries is only possible through the involvement of a range of different groups, including Māori.”

Tuatara in our culture

The chapter about the tuatara’s place in Māori culture was enjoyable and interesting to research, says Alison.

“I found it fascinating to explore the way that reptiles have been portrayed in traditional carving, for example, and I was very fortunate to have support from people in Te Arawa and the Rotorua region to photograph some carving.”

Alison acknowledges that some of the boundaries between tuatara and other reptiles are hard to separate in Māori mythology and artefacts, but the level of symbolism that these special creatures hold is undeniable.

“As someone who works with reptiles as a biologist, I found it really interesting to learn how appreciated reptiles were in different ways, by people at different points in our country’s history.”

Tuatara have graced everything from postage stamps to beer bottles in New Zealand, and the book outlines some perhaps little-known facets to the human relationship with them. For example, wealthy Victorian ladies were sometimes known to keep tuatara as pets, letting them touch their cheek or settle in their laps.

Tuatara is designed to be broadly appealing, in that ‘boxes’ of interesting information are set amongst the more detailed, scientific body text. This layout should be useful to teachers, because the information relating to a particular topic can be quickly accessed.

For primary teachers, Tuatara is a rich resource with colour pictures, diagrams, and stories. The culture-based section would make for good cross-curricular exploration with primary students, says Alison.

“That’s certainly a chapter where you don’t need a lot of scientific background to follow the ideas presented. And there are so many great images and ideas packed in there.”

For secondary science students, issues like environmental sustainability and the potential impacts of climate change on rare species like the tuatara could be good starting-points for classroom discussion. Examining national and international attitudes to conservation and how these have developed over time and could change in the future would also be an interesting way to use the book.

“There has been some study done of how temperature-dependent sex determination might influence some small tuatara populations in particular (the Brothers Island tuatara in the Cook Strait is one population to have received attention). However, my concerns are largest around the socioeconomic effects of climate change for the commitment of our community towards conservation generally, over and above the direct physical effects of warmer temperatures and rising sea levels.”

“Certainly rising sea levels are something that we can’t afford to ignore, because they’re going to affect the survivability of small populations that might lose their habitat.”

Examining our warming climate through a New Zealand context like the tuatara is a valuable way for students to map environmental change using a relevant reference point.

“I hope my book is able to fill a gap and help stimulate new research and attention in a time of global change,” says Alison.