You are here: Living with retinitis pigmentosa: one patient’s story 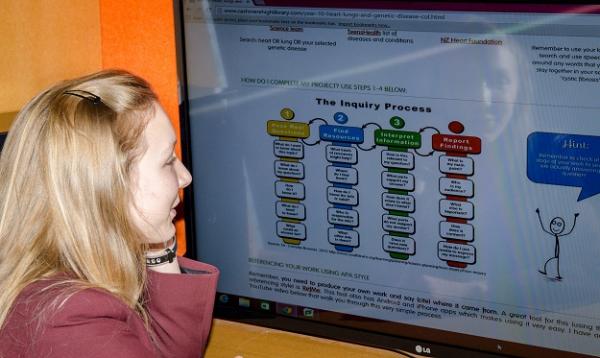 Above: Saoirse doing her research.

Saoirse Hill-Shearman is a Year 10 student at Cashmere High School in Christchurch.

She wrote the following article as part of a science communication assignment set by her teacher Leith Cooper.

Meet Zoë. She is 33, a mum-to-be, and was diagnosed with retinitis pigmentosa (RP) when she was just eight years old. She is one of around one thousand RP sufferers in New Zealand. RP is a hereditary disease that slowly degrades the vision and leaves most sufferers legally blind by the age of 40.

For Zoë the first signs of vision loss were diminishing peripheral (upper, lower and side) vision (often called tunnel vision) and a loss of night vision. This is when the light sensitive parts of the eye (rods), which are used to seeing in low light, are destroyed. It also affects the ability to judge the changes in levels, e.g. stairs, gutters. She clearly remembers tripping over a low concrete wall at Brownies, aged nine, and realising that her sight made things different for her. Now, she no longer drives at night and needs to wear polarised sunglasses to reduce the glare in the sunlight.

In some cases of RP, there is a loss of colour vision and sometimes the central vision is affected first, making detailed work extremely difficult.

Zoë’s strand of RP is called PFPR31, which is a mild and changeable form that is either present and visible to specialists by the age of 14 or can manifest later in life; Zoë was eight, her sister was 14 and her cousin was in her 20s.

The strand affecting Zoë is autosomal dominant, which means the disease is present when a single copy of the gene is defective. As Zoë’s mother has RP (with one normal and one defective gene), Zoë had a 50 per cent chance of being born with the disease. There is also no average rate of degeneration as it varies from sufferer to sufferer.

Currently, there is no cure for RP but there is a new vitamin A palmitate (the ester of retinol (vitamin A) and palmitic acid) currently in development. At present, however, this medication has too many potentially toxic side effects to be prescribed to RP sufferers.

Zoë was taking a tablet called Diamox (acetazolomide), which drains fluid build-up from the back of the eye. Unfortunately, it drains fluid from the rest of the body also, which puts pressure on the kidneys and can lead to kidney stones.  She is now taking the same medication in drop form, which is much better for her kidneys.

Another form of treating RP under development is gene therapy, and wearing sunglasses to protect from harmful UV rays can also help sufferers.

This group is invaluable as a low vision support and information network as RP sufferers with some sight have no access to the Royal New Zealand Foundation for the Blind. The key difference of this organisation is that it is patients helping other patients.

As editor of the Retina New Zealand national newsletter, Zoë offers advice on assistive technology such as phone apps that can help with low vision, special lighting strips for the home, rails on oven slides to prevent accidental burning, as well as providing recipes with ingredients that may improve sufferers’ eyesight and gardening tips for growing scented gardens.

For those seeking more information, go to Retina New Zealand’s website www.retina.org.nz or pick up one of their pamphlets at your local doctor’s office.

What Is Retinitis Pigmentosa? (n.d.). Retrieved 15 February 2015, from http://www.geteyesmart.org/eyesmart/diseases/retinitis-pigmentosa.cfm