You are here: CO2 'greening' the Earth

A new study shows that rising atmospheric CO2 levels are contributing to a significant ‘greening’ of up to half of the Earth’s vegetated land. 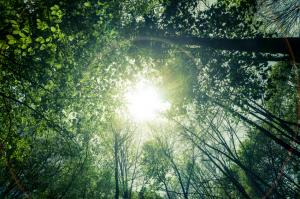 Using data from satellite sensors collected over the past 33 years, a study published in Nature Climate Change on 25 April shows that ‘greening’ – the volume of leaves produced by plants and trees – is increasing.

Titled ‘Greening of the Earth and its Drivers’ and written by 32 authors from 24 institutions in eight countries, the study shows that CO2 fertilisation is predominantly why the Earth is greening. The study also identifies climate change, nitrogen fertilisation and land management as other important reasons.

“The greening ... is equivalent to adding a green continent about two ­times the size of mainland USA (18 million km2) and has the ability to fundamentally change the cycling of water and carbon in the climate system,” says lead author Dr Zaichun Zhu, Peking University, China.

The amount of CO2 in the air, released by burning oil, gas, coal and wood, currently stands at a level not seen in at least 500,000 years and is the chief culprit in climate change.

Leaves produce sugars using energy in the sunlight to mix CO2 drawn in from the air with water and nutrients pumped in from the ground. These sugars are the source of food, fibre and fuel for life on Earth. More sugars are produced when there is more CO2 in the air – called CO2 fertilisation.

“We were able to tie the greening largely to the fertilising effect of rising atmospheric CO2concentration by tasking several computer models to mimic plant growth observed in the satellite data,” says co-­author Professor Ranga Myneni, Department of Earth and Environment, Boston University, USA.

The area of all green leaves on Earth is equal to, on average, 32 per cent of the Earth’s total surface area –­ oceans, land and permanent ice sheets combined.

Every year about one-­half of the 10 billion tons of carbon emitted into the atmosphere from human activities remains temporarily stored, in about equal parts, in the oceans and plants.

The increase in plant growth due to CO2 fertilisation has been used by contrarians, notably Lord Ridley (hereditary peer in the UK’s House of Lords) and Rupert Murdoch (owner of several news outlets), to argue against cuts in carbon emissions to mitigate climate change.

“Second, studies have shown that plants acclimatise,or adjust, to rising CO2 concentration and the fertilisation effect diminishes over time.”

“While the detection of greening is based on measurements, the attribution to various drivers is based on models, and these models have known deficiencies,” says co-­author Dr. Josep Canadell, CSIRO Oceans and Atmosphere Division, Canberra, Australia and leader of the Global Carbon Project.

“Future works will undoubtedly question and refine our results.”