The winner of the 2016 NZASE Peter Spratt Medal is our very own Dr Rosemary Hipkins, as announced by NZASE president Chris Duggan at this year’s SciCon conference. 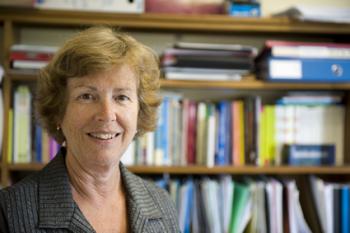 Rosemary began her career as a secondary science and biology teacher, and was actively involved in the development of The New Zealand Curriculum. She has led many national research projects exploring curriculum and assessment innovation. These projects have included studies of the Nature of Science and how it can influence teaching practice; making NCEA’s influence on curriculum a positive; and understanding the key competencies.

Despite moving out of the classroom into a research role, Rosemary remains very much in touch with classroom teachers. She has developed professional learning and support materials that bring about significant changes in teaching – and consequently in the learning of students. They enjoy working with professional learning and development facilitators, leadership groups and expert panels and they are frequently invited to speak at educational conferences.

As well as being one of New Zealand’s foremost education experts, Rosemary has never lost sight of the importance of remaining a learner herself, and in this sense she truly epitomises one of the goals of modern education: that we foster new generations of lifelong learners. She remains a valuable member of the NZASE publications panel.

The executive was unanimous in its decision to award Rosemary Hipkins the 2016 NZASE Peter Spratt Medal from a long list of nominees for this prestigious award.