You are here: Rosetta to be switched off

Rosetta to be switched off

The European Space Agency's historic comet-taming probe, the Rosetta, won't be going out in a flaming ball of glory now that it's mission is complete. Engineers are just going to park it on comet 67P - which it's been chasing around the solar system for the last 12 years - and switch it off.

Scientists involved with the project won't be too upset at the lack of a viking funeral for Rosetta, as landing the craft on the surface of 67P provides the opportunity for lots more learning before it has to be switched off and left to eternally roam the solar system - if it's not, like a first-year university student who hasn't figured out how to wash their own clothes, Rosetta might keep calling home, potentially interfering with future mission communications.

Launched in March 2004 astride a European Ariane 5 rocket from French Guiana, Rosetta's mission will come to an end on September 30.

Rosetta has given humanity unprecedented insight into the most primitive objects in our backyard: the 'dirty snowballs' of the solar system - comets. Composed largely of ice, dust, various frozen gases like carbon monoxide, carbon dioxide, methane, and ammonia, comets also contain many organic compounds such as methanol, hydrogen cyanide, formaldehyde, ethanol, and ethane. More complex molecules such as long-chain hydrocarbons and amino acids may also exist in comets.

It's this abundance of volatile materials that make comets among the most scientifically important and intriguing objects in the universe: their composition means that they were formed at great distance from the sun, and they've been kept pretty much frozen ever since, meaning a comet is the closest we can get to a snapshot of the solar system in it's infancy.

It's also considered likely that comets helped 'seed' Earth - and maybe other planets - with water, and possibly other building blocks of life. Recent experiments have successfully replicated deep space conditions, and proved that dipeptides - linked pairs of amino acids that are the shared essential building blocks of all life (that we know about) - can form in the boundless vacuum. Given the chemical soup that Rosetta has confirmed lies beneath a comet's icy crust, that means that these complex molecules could have formed there.

There's even a name for the idea that the universe has been pollinated with life by comets: panspermia.

The Rosetta mission has been the longest and most expensive in the history of space exploration, and although the mission has greatly increased the sum total of our comet knowledge, the European Space Agency certainly didn't have everything it's own way: Rosetta's landing rover, the Philae, famously bounced off 67P several times, rather than harpooning itself to the surface as intended. The mission wasn't a total loss though: the hardy little lander was eventually found wedged in a crevasse, and was able to carry out some of it's intended functions.

On September 24th, Rosetta will begin free falling toward 67P, and will hit the surface on September 30. Like the good soldier it's always been, Rosetta will stay at it's post right to the bitter end, taking lots more measurements and photos.

As reported on space.com, the ESA's Matt Taylor is dry eyed at the prospect of his baby's demise, and is looking forward to getting stuck into the real work.

"It's hard to believe that Rosetta's incredible 12.5-year odyssey is almost over, and we're planning the final set of science operations, but we are certainly looking forward to focusing on analysing the reams of data for many decades to come." 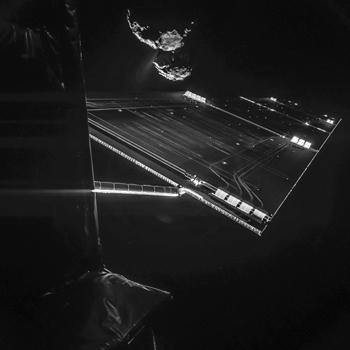 Rosetta to be switched off
Categories