You are here: Science Education and Culture » SciCon 2016: Day one done and dusted

Day one of SciCon 2016 passed by in a blur of workshops, informative lectures, networking and discussion among science educators at SciCon 2016.

Hosted by Capital City Science Educators - a branch of the New Zealand Association of Science Educators - at Lower Hutt's Sacred Heart College, SciCon 2016 has so far been a whirlwind of panel discussions, workshops and fascinating lectures - not to mention of course chances to just relax and socialise among colleagues.

SciCon 2016 in fact kicked off with an 'earth shattering welcome' at Lower Hutt's Dowse Art Gallery, on Sunday 10th July. The delegation got stuck into the action bright and early the next morning, many attending Alom Shaha's lecture entitled What do you know? You're just a teacher?

Alom, born in Bangladesh but having mostly grown up in England, is a physics teacher at a comprehensive school in London, who is also a passionate film-maker, writer and science communicator. He is the author of The Young Atheists Handbook, and he works with a variety of organisations, including The Royal Institution, University College London, and The Institute of Physics. Alom talked about his creative approach to science communication, and his focus on creating films to encourage science that goes beyond the school gate, and involves the home environment.

Before lunch, one of New Zealand's most famed, dedicated, and longest serving environmentalists, Kevin Hackwell of Forest and Bird, presented a fascinating key note lecture entitled A predator free New Zealand by 2040: our equivalent of putting a man on the moon.

Over the course of his 35 years at the frontline of environmentalism in New Zealand, Kevin has been at the forefront of many of the social movements that New Zealanders take pride in, and that arguably form part of this country's identity. At the age of 15, his career in activism began as one of those protesting the logging of the beech forests of the South Island. Kevin told his audience about his horror at some of the conditions that compelled him to do something at such a tender age: according to Kevin, napalm was being used to defoliate the trees before logging, in areas known to be Kiwi habitats. I personally found myself thinking that there's a reason why the commonplace brutality considered normal many years ago has become the unthinkable horrors of today: people like Kevin Hackwell.

The real point that Kevin brought home to the delegation though was in the title of his lecture: if we look at the history of predator eradication efforts in this country - particularly rats - in which New Zealand has been and remains a world leader, we see that a similar phenomenon to the famous Moore's Law of microchip advancement applies. Beginning with Maria Island in 1962, through D'Urville Island and others over the intervening years, the Department of Conservation has had many world first successes, in ridding our offshore habitats of introduced predators, and the size of the islands that DoC has successfully eradicated on has increased almost exponentially. Projecting into the future, Kevin assured his audience that it's not outside the realm of possibility that we rid the entire country of predators, creating a haven for our endemic bird species, and solving for good the precariousness of some species' existence. 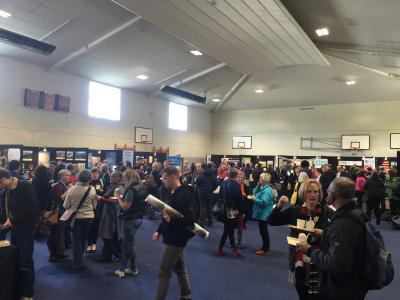 Lots of teachers and others involved with science education stopped by the New Zealand Science Teacher display for a chat about what they'd like to see discussed on the website, the big issues, or just to share their impressions of the conference so far.

Ken Kilkenny is a biology teacher at Papamoa College. I managed to corner Ken as he was trying to flee my dictaphone, and asked him what he was hoping to get out of SciCon 2016.

"I'm really hoping to catch up with some teachers of the other sciences, and see how they're supported. I'm currently looking at ways of integrating more cross-curricular stuff, especially for our Year 11s, so I want to investigate how I can build in the other sciences to our programme."

Phil Millerick, originally from the Manchester, has been teaching in New Zealand for 16 years. He's taught at quite a few schools around the country - in Auckland, Kerikeri, Taupo and Tokoroa, to name a few - and is now working at Te Aho o te Kura Pounamu - The Correspondence School. Phil was similarly unlucky enough to be door stopped by NZST.

"It's about making connections, isn't it. Te Kura teachers are widely separated, it's also a chance to meet and catch up with my colleagues from different parts of the country.

I asked Phil what he sees as the major differences in science education between his adoptive home, and that of his birth. His answer has been touched upon many times no doubt, but should provide food for thought for those interested in improving the quality of our education system.

"I was teaching for 16 years in the UK too. The only difference I think is that there tends to be a more practical slant on the teaching in the UK. Primarily I think that's due to the fact that over there, you have a lot more emphasis on lab technician support. If you've got really good support - you know, they set it up, they take it away, you've got help planning practicals - it makes your job so much easier."

Day one of SciCon wrapped with a gala dinner at Te Papa, in Wellington, a chance to unwind after a day of intensive and challenging discussion. Day two of SciCon will more of the same: thought provoking, engaging, inspiring, and useful.