You are here: Science Education and the Environment » Mermaids tears: the biggest clean-up in history

22 year-old inventor Boyan Slat may have singlehandedly revolutionised the effort to get rid of marine plastic pollution: what if ocean currents could be harnessed to do all the work? 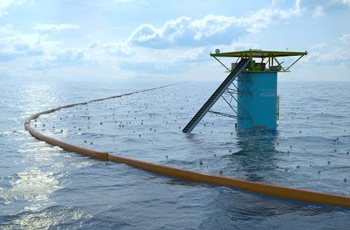 Artists impression of what the final version of Boyan Slat's ocean-cleaning machine could look like.

The world’s oceans are particularly sensitive to our plastic addiction: everybody’s heard of the Great Pacific Garbage Patch, which is larger than France, but that represents less than a third of the estimated 5 trillion pieces of plastic bobbing about worldwide.

Compounding the problem is the fact that plastic breaks down, but doesn't break up: eventually plastic pollution can break up into almost microscopically small pieces, sometimes called 'mermaids tears'. These tiny pieces of plastic can get into the food chain from the bottom up: krill are known to be ingesting them, and dying as a result.

The biggest cleanup in history

A young Dutch inventor, entrepreneur and environmentalist may have come up with the way forward.

Lots of ideas have been thrown at the (literally) mounting problem of marine plastic pollution. What they tend to have in common is chasing the plastic: usually this takes the form of moving through the water in a boat, using one method or another to scoop the plastic out of the water. There’s just one big flaw: cleaning the oceans like you clean your pool after winter could take thousands of years.

While still an aerospace engineering student, an 18 year-old Mr. Slat had in 2013 what may prove to be a key insight: what if ocean currents could be harnessed to do all the work?

Basically, his system uses gigantic arm-like structures, positioned in a ‘V’ formation. Ocean currents - the most prominent five of which are called ‘gyres’ - mean that plastic pollution is always on the move, and that means that plastic can be passively trapped and pushed toward the centre of the ‘V’, where it can be removed and taken away for processing.

The fact that plastic floats is key to Boyan Slat’s design: the arms of the enormous machine - which are planned to be 100 kilometres in length, making it the largest floating structure ever conceived - don’t need to sieve to a great depth, meaning anything that swims can just pass easily below.

After coming up with the initial idea, Boyan founded the Ocean Cleanup organisation.

Boyan has been recognised all over the world - he is the youngest ever recipient of the UN’s highest environmental accolade, Champion of the Earth; Foreign Policy magazine included Boyan in their 2015 list of prominent global thinkers; and Forbes included him in their 30 under 30 edition earlier this year.

After flying through an initial feasibility test - the cover of which was made from recycled ocean plastic - a pilot phase was crowdfunded to the tune of USD 2.1 million.

Further funding has been secured from the corporate world: it was announced in June this year that prominent dredging and marine contractor Royal Boskalis Westminster (Boskalis) have stumped up a third of the required EUR1.5 million, with the rest made up of contributions from the Dutch government, and an anonymous philanthropist.

The prototype structure is a modest 100 metres in length, a mere fraction of the fully realised version, which Boyan and his team aim to have in the water and sieving with it’s 100 kilometre-long arms between California and Hawaii by 2020.