You are here: SciCon day 3: in defence of flat earthers

It was straight into the action on the final day of SciCon 2016, with a bright and early keynote speech entitled 'In defence of flat earthers', a provocative presentation to blow off any cobwebs that may have been picked up by members of the delegation during an intense Tuesday night’s pub quiz. 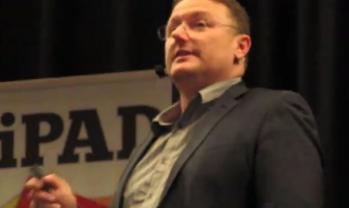 Speaker Matt Richards, who leads the education programme at Te Papa Tongarewa, the Museum of New Zealand, was introduced as both a Google Certified Educator and a Microsoft Innovative Educator.

Surely someone with the critical capacity to keep a foot in both major e-learning camps couldn’t be ‘barracking’ (to use the parlance of Matt’s native Australia) for the confounding resurgence of flat earth theory?

Matt was first compelled to look into this alarming return of pre-Enlightenment thinking when a friend, whom he regarded as an intelligent individual, told him he’d been researching the flat earth ‘hypothesis’.

“What intrigued me the more I looked into B.o.B and his following,” said Matt during his lecture, "was that he was looking at the different aspects of his world and trying to make them fit with his theory.”

By way of example, Matt pointed to one tweet of B.o.B’s in particular:

“So u can see stars without light pollution.. During sunset.. But not from space??”

Matt realised that B.o.B was basing his argument on the famous ‘Blue marble’ image taken from space in 1972 by the crew of Apollo 17. Most people of course have seen this image: it’s everywhere.

“So we’re living in a world now where the media we collect online forms what we perceive as being truth,” said Matt. He put forward the idea that an unforeseen consequence of the internet and social media is that it is easy to connect and commune with only those who agree with you, and whose theories are shared in your particular echo chamber, providing ‘evidence’ for convictions and hunches.

As Matt put it, because one can choose to expose oneself only to the opinions of those one agrees with, many have been emboldened to ask the question ‘why should I trust mathematics that I don’t understand, to explain phenomena I can’t see, over what I can see with my own eyes?’

I personally found myself thinking on a tangent after Matt’s incredibly thought provoking lecture: are social media platforms, whose algorithms are honed by commercial imperative, unconsciously complicit in the rise of anti-intellectualism that many have argued we are witnessing?

By driving people toward their like-minded peers, in order to create self-sustaining communities, are the likes of Facebook engendering quite the opposite effect to the quantum leap in human interconnectivity – and expansion of capacity for humanity – that social media has been lauded for?

Is social media creating rampant tribalism by its algorithm-driven tendency to clump together those who agree in the same space, and insulate them from dissent, and the rigour of rationality? Is Facebook et al helping to drive the dreaded ‘post-truth’ society’?

All of this of course has huge implications for teachers, and particularly science teachers. Part of what teachers are imparting is the love of objective truth.

One of Matt’s presentation slides really brought home the fact that teachers are at the forefront of the battle to preserve and pass down this self-evident truism: a quote from Alvin Toffler, who said, “The illiterate of the 21st century will not be those who cannot read or write, but those who cannot learn, unlearn, and relearn".

As Matt then went on to point out, the tools teachers can use to employ in fighting this battle can include the 21st century key competencies: beyond knowledge, to learning.

After lunch – the standard of catering was exemplary, by the way – there was time for the last session of the conference, a last round of concurrent ‘Make ‘n’ take’ sessions, workshops, and seminars.

While some delegates were whisked off to a final field trip to Matiu/Somes Island in Wellington Harbour, the rest convened in the auditorium for a closing ceremony.

Chief conference organiser and chairperson of Capital City Science Educators Kerry Parker spoke about her admiration for all the teachers at SciCon 2016; for holding onto the enthusiasm, drive, and dedication that should see a new generation of literate 21st century New Zealanders reject flat earth theories in any sphere of knowledge, wherever they rear their pre-truth society heads.