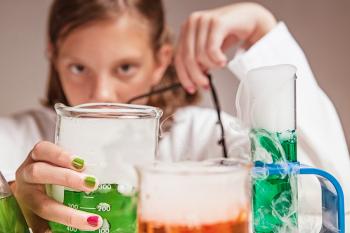 Entrants in the Manawatu Science Fair - one of the oldest in the country - are judged first by a student panel, which students can apply to be part of. Students must employ all their developing science capability skill to do justice to such a position of responsibility, says Heather.

Panel members ideally won at Manawatu Science Fair before. The members of the 17-strong panel can come from any of the participating schools in the region.

Heather says that the region’s science fair is an annual chance for both practising and learning scientists to meet, mingle, and discuss.

“It brings together young scientists, older scientists, and the community. This means that there are opportunities to mentor students forward.

“If you’d been at the science fair on Friday night and looked around the room, you would have seen graduate students, scientists starting their careers, there were PHD candidates, there were fellows of the Royal Society; there were world leaders present. They were all giving up their Friday night to come and talk seriously to our students about their science and technology projects.”

Heather says that the reason she keeps coming back as one of the organisers and mentors of Manawatu Science Fair is the excitement among the kids.

“Just watching that whole mixture: primary, intermediate and high school kids, and people who have made a career or a life in science. The committee now want to film the next one, because it struck us this year that many of the people present had been involved with science fair for twenty years.”

When examining the many entries at Manawatu Science Fair, the youth judging panel must use all of the science capabilities when arriving at a decision for each project. The application of the capabilities is what’s required to take out the subjectivity, says Heather. The areas the judges make a determination on include their overall impressions, and the quality of a project - it’s depth of research and relevance. Heather says too that it helps that judging is done anonymously and doesn’t involve student presentations - which can favour students who are great communicators.

Some years ago, says Heather, the Manawatu Science Fair introduced encouragement prizes, which are awarded to projects outside the top 10 ranked efforts, but that deserve special acknowledgement anyway.

“We decided on this initiative a few years ago, when we realised that their are some really great projects, that for whatever reason aren’t quite there. They have lots of potential, but at the moment the student hasn’t, for example, displayed the depth of research, or taken a certain technology far enough, to lift them into that prize winning category.

“These students are given a science starter kit, and a lab coat. We have university students coming back to our science fair who are still wearing the lab coat! Some of these students have taken their science fair project even further since they left school.”

Heather says too that often the decisions the youth panel reach can’t be easily distinguished from those of the more mature judging team of prominent scientists and educators.

The youth judging panel is always well subscribed, says Heather. She’s been conducting some research to work out what kids value in the experience.

“I’ve been doing some surveying of the judging panel students. I wanted to know what they enjoyed, what they found challenging, and what their learning was. They really enjoyed the group discussion, but they also enjoyed thinking carefully about the projects. That falls under the  ‘assessing data’ capability.”

Heather believes that the youth judging panel is the perfect vehicle for students to flex their critical faculties.

“What I saw was just this totally engaged bunch of students, really employing some powerful critical evaluation: ‘was the project a valid investigation?’ ‘Did [a science fair project] have controls in place?’ ‘Did they require controls?’ ‘Was the investigation relevant?’ It was really serious stuff! It was intense, but it was also incredibly exciting to watch the depth of learning that was going on.

“I think in our science fairs we need to involve the students themselves more. What they’re really good at, for example, is having a great understanding of whether a project is just a straight download from a website. They also have great insight into whether a project has been discussed in the community, in terms of authenticity.”