You are here: Planet Earth and Beyond » Not just another brick in the wall: new Stardome Lego display

Not just another brick in the wall: new Stardome Lego display

Earlier in November, Auckland’s Stardome Observatory & Planetarium launched two new permanent displays, that will fuel youthful interest in humankind’s past and present in space. Education manager Vanessa Rancour hopes that one of the displays can become the (Lego) building blocks that will inspire a new generation of space engineers. 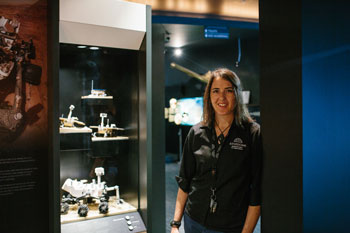 Stardome's Vanessa Rancour, in front of a Lego model of a Mars rover.

The new displays are part of an extensive refurbishment at Stardome, and explore the history of the machines we’ve sent beyond our atmosphere, as well as giving students a connection to space endeavours that are happening now.

The History of Spacecraft exhibition features all the game-changing machines of our fairly brief history in space, constructed from Lego bricks. If though you’re imagining a rainbow-coloured model that looks only vaguely like Apollo 11, think again: from a distance of just a few metres, these 'toys' look strikingly like the real thing. Every brick is coloured to match the historic craft, although the Lego astronauts are a dead giveaway when you get up close.

You may be wondering whether the models were created from Lego bricks so that kids could take them apart, and you’re probably now imagining an unholy mess at the end of every day, and models that will inevitably obey the law of entropy and begin to look more like spaceships of youthful imagination. Stardome education manager Vanessa Rancour says that while she’s a patient person, the thought of rebuilding several spaceships at the end of a long day gives her chills. The idea to build in Lego came about because that was the best way to build interactivity into the exhibit, says Vanessa.

“If you go to the International Space Station [model] for example, you’re able to see its inner workings. You can pull on a lever, and the Destiny module [of the ISS] actually opens up, and you can see the little Lego people floating around and doing their experiments.”

The same applies to the Saturn rocket models - the rockets that carried the Apollo missions into space - pull a lever and you can see the guts of these behemoth boosters.

The models in the History of Spacecraft exhibition span the entire history of space machines, including the Electron rocket built right here in New Zealand this year, going back as far back as Yuri Gargarin’s Vostok craft, the first to take a human being into outer space. There are 15 models in the Saturn rocket section alone, so there’s many hours of fascination to be had, for kids of all ages.

Another factor behind the decision to construct the exhibit from Lego was Vanessa’s childhood obsession with the beloved Danish bricks. She hoped, correctly as it turns out, that Lego spaceships might create a stronger connection between history and kids, she says.

“Even though [the kids] can’t actually take [the models] apart, they’re just fascinated with them. It’s really cool, because a lot of our displays previously didn’t have as strong an attraction for kids, they were more appealing to adults. Whereas I think the new exhibition is geared toward everybody who loves Lego, and that definitely includes adults!”

“We have an iPad-based quiz here at Stardome, which gets kids running round to find answers. We’re now finding that a lot of the time the kids will put down their iPads and gravitate toward the Lego display, which is new. Previously the kids were really competitive about the quiz, whereas now they don’t seem to care who wins once they spot the Lego exhibit!”

Vanessa hopes too that the kids are inspired by the models to go home and create their own spaceships. Who knows, perhaps the new Stardome exhibit has already catalysed the next wave of vehicles to take mankind beyond this little blue marble.

Not just another brick in the wall: new Stardome Lego display
Categories