You are here: The Living World » Intelligent kākāpō matchmaking

An innovative genome mapping project is aiming to protect the fragile kākāpō species from itself. 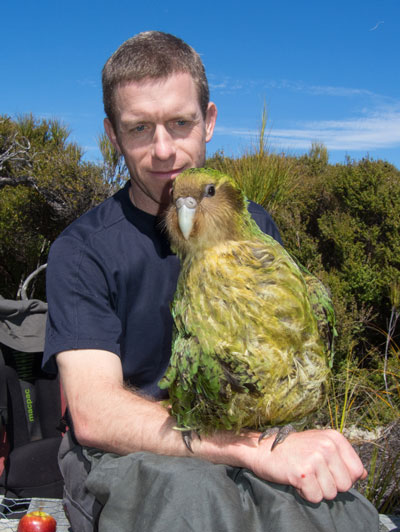 The brainchild of Department of Conservation (DoC) scientist Dr Andrew Digby, a new project to sequence the genome of every single individual in the kākāpō species has successfully met its funding target of $45,000.

Understanding fertility and disease resistance at a molecular or genetic level is considered vital to growing the fragile kākāpō population. Hatchlings are currently being nurtured by the dedicated DoC Kākāpō  Recovery Team on Whenua Hou/Codfish Island, Anchor Island, and Hauturu-o-Toi/Little Barrier Island. The breeding season is still in progress.

Last year, the entire genome of a single specimen named Jane was sequenced for the first time, in collaboration with a team from Duke University in the US. Digby says that sparked the ambitious project to profile the entire species.

“In the past we might have done single genes, or groups of genes, and that gives you bits of information, but with all the genes of an individual you can, by inference, know a lot about the species.

The team is sampling and sequencing the genetic makeup of the kākāpō species in three stages of 40 birds at a time. Older birds from populations on Fiordland or Stewart Island that have been moved to Whenua Hou Island will be mapped first. This is because, in genetic terms, these birds should prove to be healthiest, says Andrew.

“The higher up the family tree you go, the more genetic variation you get. As a species goes through time, it loses genetic diversity. You can never regain it. With a small population, such as you have with kākāpō, you get more and more inbreeding and this can have a huge impact. It can negatively impact fertility, health; there are a lot of negative outcomes. The more inbreeding you get, the more individuals are susceptible to certain diseases.

“There could be, in the future, a disease that comes through that all kākāpō are affected by, and we lose all but one. So we could lose the entire population, just from one simple disease. The more genetic diversity in a population, the less likely that is to happen.”

Digby and his team intend to use the information gathered to do some intelligent matchmaking.

“We can’t increase genetic diversity among kākāpō, but we can try to maintain the diversity that we have now.”

The fertility of the kākāpō population is clearly very important. If the team has genetic information at hand for every member of the species, says Digby, it becomes so much easier to aim Cupid’s arrow at the birds most evolutionarily favoured to take the species into the future.

You can donate to the kākāpō genome sequencing project here.