Rutherford’s Den – the science learning facility within Christchurch’s Arts Centre – is set to re-emerge on 27 August after sustaining severe damage in the Canterbury earthquakes, and it’s now more interactive than ever before. 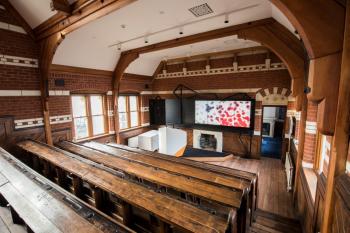 Rutherford’s Den is a science learning centre in central Christchurch – Worcester Boulevard, part of the Arts Centre – where students from years 1 to 13 can come to be immersed in the discoveries that New Zealand’s most famous scientist, Ernest, Lord Rutherford and his peers made possible. And it all takes place in the very buildings where the eminent science heavyweight himself conducted some of his early experimentation.

The buildings that make up the Arts Centre were, until 1978, part of Canterbury College, which moved in that year to the suburb of Ilam, where it remains to this day, renamed the University of Canterbury. The buildings vacated by the growing university were held in trust for the people of Canterbury, and are still serving the community in this capacity.

Damage to Rutherford’s Den as it was prior to the big earthquake of 2011 was so extensive that the building had to be closed. While the shell of the buildings remain, retaining their ‘English college’ charm, the structure has been considerably strengthened. Arts Centre communications manager Caroline Fenton says that the revitalisation of the building itself provided the perfect opportunity to create entirely new learning programmes too.

This has involved the installation of some of today’s learning technologies that, it could be argued, Lord Rutherford and his contemporaries helped set the evolutionary ball in motion for: digital blackboards and touchscreens now help to create a thoroughly interactive experience for students of 2016, perhaps in contrast to those who laboured in dim light, scratching away with paper and ink, when the first Canterbury College students pursued their scientific passions here.

Another of the resources teachers will be able to utilise at Rutherford’s Den helps to illuminate for students the area of science that Rutherford is perhaps best known for his huge contribution: our understanding of atomic structure. The display is one that users will be able to ‘step into’, and uses light projection and sound to create a truly immersive, 3-dimensional experience.

Rutherford’s Den employs three teachers, who after the earthquake continued to take the LEOTC learning programme to the students of Canterbury. There are four programmes available, aimed at primary, intermediate and secondary age groups. These encompass several curriculum subjects.

At primary and intermediate level, three learning programmes are available: ‘Ernest and other famous New Zealanders’ aims to get kids thinking about Kiwi identity, and links to social sciences Levels 2 and 5 at years 5 to 8; ‘Arty Atoms’ is an introduction to atomic structure and forces, linking to science Levels 2 to 5 for years 7 and 8; and ‘Inventions and Innovations’ encompasses inventions, changes in writing, and changes in communication and lighting technology.

At secondary level, the main programme on offer – at this stage, as programmes are still being finalised – is ‘Radioactivity – from the old to the new’. The programme relates directly to achievement standards, and compares and contrasts different models of the atom, and how they evolved over time, including interactive research on Rutherford’s Gold foil experiment.

More information on Rutherford’s Den, including how to book a session for your class, can be found here.