In August, NZ Science Teacher previewed an event called ‘Fast Forward’, a week-long festival of science, technology and innovation in the Wakatipu region. Underpinning Fast Forward was an in-depth project that Jim Gilbert, head of science at Wakatipu High School, got his students involved with, that examined the future of Queenstown. With the festival now done and dusted, Jim reports back on a successful look at science in his hometown. 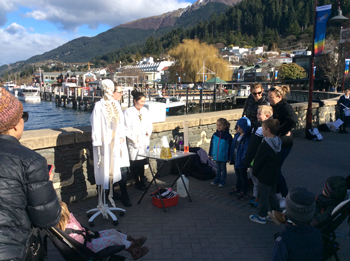 “In a week that celebrated science and focused heavily on students participating in science the inaugural Fast Forward week (part of Catalysts inSIGHT week) for schools saw over 1500 student contributions to the week, from science busking to hands on laboratory work.

"On Monday we began with a keen group of students sharing science with members of the public along the waterfront in downtown Queenstown. There was a mix of curiosity and wonder as the students warmed to the task of engaging passers by with science demonstrations.

"That afternoon we launched the week officially with a debate on the moot “the future of our world is in my hands today”. The debate was lively and engaging, with discussions continuing throughout the week. The debate was an extension of project work done in science this year that challenged students to look at the role science plays in our modern world.

"Tuesday and Wednesday saw 370 primary school students attend Lab Open Door. 34 of our students took on the role of teacher, and led groups of predominantly Year 7 and 8 students through a series of activities that included a forensics lab, a look at the chemistry of acids, microscopy and cells, and a study of wave behaviour (sound and light). This was complemented by a visit to the Lab in a Box which spent 3 days at Wakatipu High School - sharing wonderful science not just with students but also with members of the public from 3:30 - 5pm each day. Our WHS students did a fantastic job with their primary school charges. Students teaching students was one of the absolute highlights of the week, and a privilege for us to observe as teachers.

"Thursday was showcase day at the Queenstown Memorial Centre. After a frenetic morning setting up, we opened the doors at 1pm. Science Fair boards, table top science, posters, buskers and nearly 400 visitors made for a busy afternoon. It’s hard to describe the atmosphere unless you were there, but students gave a very good demonstration of their science capabilities and enthusiasm. We were also very fortunate to welcome Professor RIchard Blaikie, deputy vice-chancellor of the University of Otago, who spent three hours in the morning judging WHS project work. He spent some time looking at primary school science projects, and was very complimentary of the quality of thinking, creativity,  and process demonstrated by all involved. The overall best project award went to Year 9 students Arwyn Donnelly-Cranston, Molly Woodham, and Lucy Tulloch for their investigation into water quality. Their final presentation was a very well produced video ‘Water quality in the Wakatipu area.’

"Thursday evening saw eight students take to the stage to present their TEDx-style talks. Although there were a lot of nerves, the students all spoke extremely well and passionately about their respective topics. The audience was treated to a range of topics, from Olli the self-driving bus, the future of bees, to a case for the Queenstown Lakes District Council to give youth a voice through a youth council. QLDC traffic engineer Andrew Edgar was in the audience at Thursday  night's TEDx-style salon. Taking photos to study later, Andrew asked for a copy of the students’ research into traffic, and has forwarded a video to the national Visitor Driver’s Project Working Group.

"Student Erin McDonald suggested that Bridesdale Farm should become a bee-friendly subdivision. Catalyst have since connected Erin with the developer, and Bridesdale have now adopted Erin’s idea, which she will be working with them to achieve.. Maddie Jones, who spoke on the topic of a youth council, is now also in talks with council and this initiative looks like it has a good chance of realisation. Science is certainly not confined to laboratories and lab coats.

"On Friday we welcomed a team from the Centre for Science and Citizenship who worked with approximately 100 Year 9 students exploring the topic ‘how we move’. Students participated in this workshop looking at traditional modes of transport, fuel sources, and explored alternative energy options. They considered the global impact and looked at the social costs and benefits. It was an in depth and challenging day as students learnt that everything comes at a price, and that there is rarely a simple answer to big challenges that we face.

"None of this would have been possible without the support and dedication of the team at Catalyst Trust. Their work to bring inSIGHT and Fast Forward to life is greatly appreciated. In particular I would like to thank Monika Fry, AJ Mason, Sarah Jones and Cath Gilmour for the time and energy they put in on behalf of schools across the Wakatipu. We are looking forward to beginning preparations for inSIGHT and Fast Forward 2017."

470 students visited Lab in a Box