You are here: The Nature of Science » Contraptions, chaos, and creativity

New teaching resources are launched to accompany a web-series. 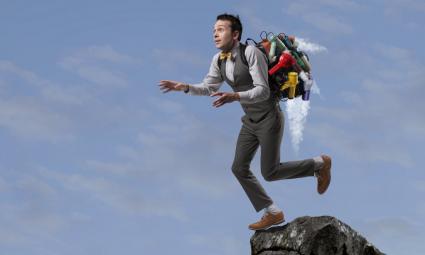 Joseph Herscher, a.k.a Jiwi, with his jetpack. Image: NZ On Air.

Start collecting marbles and cardboard tubes: the kinetic potential of everyday objects is being celebrated with a new set of science resources.

Practical physics is made fun in Jiwi’s Machines, a homegrown, engaging new web series funded by NZ On Air. And to complement the clips, a set of science education resources has also been launched for students in years 4 – 8.

Jiwi’s Machines is a four-episode web series that follows Jiwi (kinetic artist Joseph Herscher) as he builds complicated contraptions. Each episode introduces the creative possibilities of simple machines and physics: from a breakfast-delivering contraption to an ingenious lightbulb-changing device.

The teaching resources, created by science educator Brigitte Glasson and designed by illustrator Nic Marshall, are linked to The New Zealand Curriculum, in particular the Physical World strand. The resources explore important scientific concepts such as friction, balance and gravity.

“The wonderful thing about Brigitte’s lesson plans is how they combine doing and thinking with a great sense of humour,” says Herscher. “She’s really up to date on the New Zealand science curriculum and she uses a hands-on approach to model what 21st century science learning can look like.”

Herscher hopes the series, science videos and educational resourceswill inspire Kiwi kids and their teachers to get creative.

“I’d love to see classrooms build their own crazy machines and film them and send them to us,” he says.

Extra science video clips focus on the workings of important machine components such as levers and pulleys, axles and wheels.

The teaching resources can be found here.