You are here: Literacy & Numeracy » Falling for science: Bernard Beckett 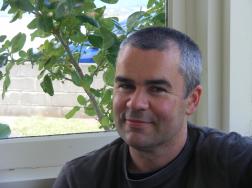 Bernard Beckett has fallen for science.

The author of a wide range of novels, plays, and film scripts was born into a large family in rural Wairarapa. He started his career as a secondary teacher in the 1990s, and with any slivers of time he found, he started writing: plays, novels, and non-fiction. The young adult novel Genesis is his best known and introduced him to an international market.

Bernard says Genesis was conceived after taking part in a Royal Society Teaching Fellowship in 2005. He spent a year at the Allan Wilson Centre, an international leader in the field of molecular biology. The result: a ‘teen sci-fi metaphysical thriller’ book now translated into more than 20 languages.

The non-fiction work Falling for Science was published in 2007, and in 2011, August, which centres on the theme of free will, was published. New Zealand Science Teacher talked to Bernard about writing and how this intersects with his work as an educator.

Hi, Bernard. You're a writer and a secondary school teacher. How do you think your teaching work influences your novel writing?

There are two lines of influence here. In the first case, a great deal of my writing involves teen characters, and in terms of where my sense of what they're like, how they behave etc. comes from, those conceptions undoubtedly spring from my contact with teens in my job.

The second aspect is to do with the fact that teachers, inevitably, have things we want to say to the young. Hopefully that doesn't stoop to the didactic, but equally, if one doesn't have a set of ideas, interests, and behaviours one wishes to pass on, then teaching is surely the wrong profession to have chosen.

Genesis is the best-known of your novels. What inspired the key concepts, and had you always been interested in reading and writing science fiction?

Two key ideas inspired me when it came to writing Genesis. One was the sheer grandeur, to use Darwin's word, of the evolutionary perspective. It drives me slightly nuts that the single most interesting idea humanity has stumbled upon does not sit front and centre of the educational curriculum. The majority of our students will leave their 12 or so years of state-funded education without ever really having been exposed to the notion of natural selection – certainly not in any detail.

The other notion sitting at the centre of the novel comes to us via philosophy (another area of knowledge that schools could well consider sharing with the young). What on earth is this thing called consciousness, and how are we to line up what appears to be a mechanistic brain, with the irreducibly first person experience of being alive in the world? We've not yet answered that question, and puzzles make for great starting points in fiction, and indeed, in classrooms.

There is a dystopian element in Genesis. In your experience, do young readers bring fresh perspectives to the 'big ideas' in science fiction?

The freshness the young reader brings is to do with the fact that very often, ideas that for the adult have become tired cliches, are for them new and exciting. Very often, particularly with problems and puzzles, we move on not by solving them, but by becoming increasingly uncomfortable with the lack of a solution. Many adults, for example, don't want to consider philosophy because it inevitably challenges their certainties. The young, at least sometimes, bring a naive optimism to the table, a belief that the problem can be solved, and so you get that privileged flourishing of curiosity.

Do you think there is a place for science fiction literature in teaching key science concepts to secondary students (or adults, for that matter?)

I think it can serve as a good starting point. I remember, some decades back now, in my teacher training year, being solemnly told that a lesson consists of 'catch 'em, teach 'em, test 'em.' Not terrible advice, as it happens, and the catch 'em phase remains as important as ever. Before we instruct, we must find a way of engaging interest. Fiction's very good at that. The trick, however, is not to stall at the level of entertainment. It's not enough to amuse. The hard work of engagement with ideas, and indeed instruction, has to follow.

How was your interest in science first kindled?

There were various points of contact. I remember at primary school being encouraged by a teacher to try to find out how siphoning worked.

This meant playing around with hoses and buckets (the joy of living in a time before the internet, when 'find out how' morphs too quickly into 'search for on...'). Not surprisingly, I didn't make it all the way to the correct answer – pressure gradients were a little beyond me – but the first few steps were nevertheless exhilarating. At secondary school, science slid into various rituals involving memorising and calculating, and some of the joy leaked out of that particular balloon. Popular science writing brought me back into the fold, and subsequently, a year at The Allan Wilson Centre bedded in my love for the subject.

Can you recommend other authors and/or books to teachers who are interested in reading more science fiction?

There are so many fantastic books in the popular science world now. If you're lucky you'll have a quality independent book shop nearby, with whole shelves of the stuff to choose from. A particular favourite for me is the Best American Science Writing series, an annual anthology of top quality science journalism. It's a great way of whetting the appetite.