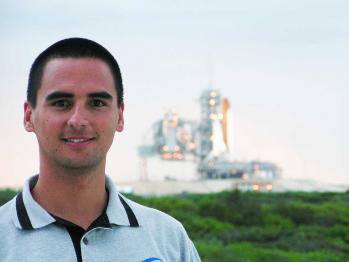 Massey University’s Pūhoro programme is helping to bring science inspiration and support to Māori students in the Manawatū region.

In 2014, only 23 percent of Māori students achieved one or more science or math subjects, compared with 47 percent of the total population.

The Māori Science Academy was launched at the Palmerston North Convention Centre on 30 January and aims to provide secondary students with fortnightly tutorials, mentoring, field trips and lab sessions in science.

The first intake includes about 80 year 11 Māori students from several schools in Manawatū.

Massey University academics will engage with teachers, students and their whānau to support Māori secondary school students from NCEA studies through to university, and hopefully, science careers.

Māori NASA aerospace engineer Mana Vautier (above) travelled from Houston in the United States for the opening. As the ambassador for the new academy, Mana will be regularly checking in with the students and providing ongoing support.

Mana, who says he’s been described as ‘on track to being the first Māori in space’, is pleased to be the ‘Big Brother’ for the initiative.

“I especially like the ‘hands on’ aspect of field trips, lab work and career exposure. I have always enjoyed helping other people, and with my Māori heritage, I am excited to be a part of this academy.”

"I would love to fly in space – that is the ultimate dream. The experiences, the emotions, the perspective, the development and progression of humanity and technology and innovation – it fascinates me," he said at the launch.

The Pūhoro programme is funded by Massey University and Te Puni Kōkiri, with support from the Palmerston North City Council, Te Tumu Paeroa and the New Zealand Qualifications Authority.