You are here: Realising a dream in science

Realising a dream in science

Hi Chris. You are a young scientist – what have you been doing since you left school? 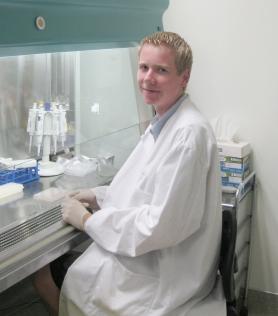 I have been having a holiday, but also I have been given a LENScience Summer Scholarship that is helping me to develop the skills needed to turn research into a scientific publication, with my work with kawakawa (a native shrub used in traditional Māori medicine) providing a learning model.

I have been awarded my Gold CREST Award, my LENScience Junior Scientist Award with Distinction, and in December attended the Royal Society of NZ’s Realise the Dream at which I received the American Ambassador’s Outstanding Award. This will see me represent New Zealand at the INTEL Science & Engineering Fair in Anaheim, California in May 2014.

How do you describe what you are doing at the moment?

I am being supported in developing the skills needed to turn research into a scientific publication, with my kawakawa work providing a learning model. This might allow me to publish my work as a student publication in a peer reviewed journal.

Can you tell us a bit more about your kawakawa work? 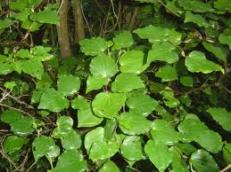 Rongoā, the traditional Māori way of treating illness and disease, is an important part of Māori culture. Māori typically see health and wellbeing as being made up of four aspects: taha wairua (spiritual), taha hinengaro (thoughts and feelings), taha tinana (physical), and taha whanau (family) (Drurie, 1998). All four of these aspects interact with each other, linked by spiritual awareness. An important part of rongoā is the use of plants and herbs to combat and prevent both physical and spiritual sickness (Jones, 2012).

Kawakawa (Macropier excelsum) is a New Zealand native plant. It is found in coastal regions of New Zealand as far south as Banks Peninsula, as well as on Chatham Island (Metcalf, 1972). It forms a bush or small tree and grows up to six meters in height (Poole & Adams, 1963). The leaves are heart-shaped and are often riddled with holes, which are caused by the larva of the native moth, Cleora scriptaria.

Despite this evidence, there have only been two previous studies on the medicinal actions of kawakawa, neither of which identified significant anti-bacterial or anti-viral activity. The earliest of these was that of Calder et al (1986), which screened methanol based extracts of kawakawa leaf against a variety of bacteria. It demonstrated minor activity against Staphylococcus aureus and Trichophyton mentagrophytes. This activity was significantly less than that was seen in other native plants such as Tetrapathaea tetrandra or kohia (New Zealand passionfruit, Passiflora tetrandra). A similar study conducted by Bloor (1995) included viruses and cancers as well as bacteria. In this study extract, anti-bacterial and viral activity shown by kawakawa was attributed to background tannins rather than novel bioactive compounds.

However, there are limitations associated with those studies. Both used organic solvents, not reflective of extraction methods used in traditional Māori practice (e.g. making a poultice or tea infusion) (TeRito & McPherson, 2012). Therefore, it is possible that these non-traditional extraction methods are not suited to extracting bioactive compounds from kawakawa. Consequently, there is a disparity in the literature regarding scientific evidence to support the effect of kawakawa use in rongoā, historically and currently.

Inflammation is one of the body’s innate responses to a noxious stimulus. Inhibition of an inflammatory response is one mechanism that could explain the medicinal properties of kawakawa observed by Māori in rongoā. Inflammation is a result of both viral and bacterial infections, in both of which instances there is circumstantial evidence to suggest that kawakawa was inhibitory (Riley, 1994; Ngāwhare-Pounamu, 2005; New Zealand Association of Medical Herbalists, n.d.; Jones, 2012; Brooker, et al., 1987). Furthermore, inflammation is one of the main causes of pain or discomfort (Nordqvist, 2012) and so an anti-inflammatory agent may reduce the symptoms of the problem. This might again account for the traditional belief that kawakawa is a potent medicinal plant.

What was your research question?

It was necessary to extract the bioactive compounds in the leaves into a liquid form that was compatible with exposure to living cells. There are a variety of methodologies that could be used to extract these compounds from the plant material. Māori traditionally either created a hot poultice of kawakawa or made a tea with the leaves. However, in modern scientific studies, bioactive compounds are commonly extracted from plant material using organic solvents, reflux techniques or enzyme assistance (which are generally used to improve the efficiency of the extraction process).

Two different extraction methodologies were used in the biological assays. The aqueous extract was prepared from fresh leaves infused in hot water. This was intended to be analogous to making tea and similar to the method of preparing kawakawa in rongoā. The extracted material was then freeze dried.

Can you tell us about the awards you've received for your work? 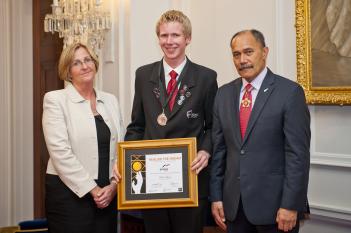 At the Manukau Science & Technology Fair I was awarded:

I was also awarded the LENScience Junior Scientist Award with distinction, a Royal Society of New Zealand Gold Crest Award, and a place on the RSNZ Realise the Dream programme, which is where I received the American Ambassador’s Outstanding Award. This will see me represent New Zealand at the INTEL Science & Engineering Fair in Anaheim, California in May 2014.

I have received support from a range of people in doing this research. In particular, Dr John Taylor and his team at the School of Biological Sciences at the University of Auckland who mentored me on the scientific aspects of my project and provided laboratory space for me to work in, Jacquie Bay, Dr Sarah Morgan, and the LENScience team at the Liggins Institute and the University of Auckland who guided me on the process of scientific research and provided educational support, and Mrs Sally Barclay, who taught at Howick College. My research was funded by Ngā Pae o te Māramatanga. Daniel Patrick, Dr Dan Hikuroa, and Dr Marilyn McPherson from Ngā Pae o te Māramatanga were very supportive of me and my research.

What is the significance of this work?

My research fills a niche in the literature because no previous scientific study has described a mechanism by which the actions of kawakawa in rongoā can be explained. Therefore, my study supports the cultural practice of Māori with scientific evidence.

Furthermore, an additional benefit of research like this is that it validates the beliefs of those who use indigenous medicines. For example, this study may help users to affirm their belief in rongoā because they now have scientific evidence to support the efficacy of that treatment or indigenous medicine system. This may be particularly useful for Māori communities whose traditional uses of kawakawa in rongoā might have been criticised.

It also helps to affirm the use of other parts of rongoā, such as the use of other plants considered significant in the practice, like rātā, koromiko and kūmarahou (Jones, 2012), but which have not yet been scientifically proven.

With regards to rongoā, wider societal acceptance may help users to feel more comfortable using rongoā and sharing knowledge about rongoā and its use.

Not really. In many ways, my interest in science began at Somerville Intermediate School when students were given the task of doing a science fair project (compulsory in years 7 and 8). I enjoyed being able to come up with, and then develop, my own ideas into a research project. However, I definitely didn’t want to be a ‘scientist’ after school, nor did I take science as a subject in year 8.

I continued to take part in science fairs at Howick College (they were compulsory in years 9 and 10), supported by the mentoring of my science teachers, and in particular Mrs Sally Barclay. As a Year 10 student in 2010, I won a coveted place on the RSNZ Realise the Dream programme. During Realise the Dream, we spent a day at the Liggins Institute, which was my first experience of a university campus. I came away from the whole experience determined to do more science, and from the visits to places like the Liggins Institute during that programme, knowing that there was much more to science than what I could experience in school. However, that said, when I began NCEA science in 2011 I became even more interested in science as I enjoyed the kind of things that we were learning.

In February 2012, I was accepted into the LENScience Junior Scientist Award programme having, under the guidance of my teacher Mrs Sally Barclay after developing a very high quality research proposal around my growing interest in rongoā, and in particular, the role of kawakawa. I presented a proposal to address the disparity I observed between the evidence from rongoā māramatanga and the scientific literature regarding the potential anti-bacterial and anti-viral properties of the plant.

Whilst undertaking my research, and studying senior biology and chemistry at school, I discovered that I actually really did enjoy science, and that I wanted it to be part of my future.

In 2014, I am starting a science/law conjoint degree at Auckland University.

Although I am unsure where exactly I will end up at the end of that degree, I would certainly like to make scientific research part of my future.

Realising a dream in science
Categories