You are here: Dali & Schrodinger: musings on creativity in science

Geologist Brian Ricketts makes the point that the creative act of imagination is as important to scientists as it is to artists, and ponders the relationship between the two aspects of human endeavour. 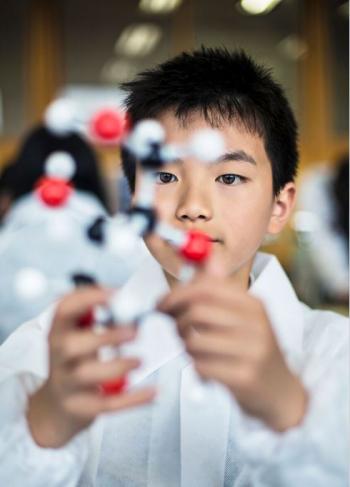 Art can be thought of as (among other things) the construction of sensory (conscious and subconscious) images; images conveyed by the artist or construed by the audience. Science on the other hand is often thought of as the construction of hypotheses and theories, of grand ideas. In the vocabulary of science, words and phrases like logical analysis and objectivity are deemed central to the whole process of doing science and frequently are used to set it apart from other human endeavors, like art, at least in the minds of those who like such distinctions. But images are also central to science. We create them whenever we talk of evolutionary lineages, of Schrodinger’s Cat, double helixes, nano-particles and atomic tunnels. In my own discipline, whenever I think of James Hutton’s (1785) discovery of deep time (geological), I don’t think of him engrossed in syllogisms, but in some intriguing mix of reason and creative wondering at the world he observed. The syllogisms probably came later. There is creative thinking in science; it is the same creativity that emboldens the painter and poet to explore the internal and external universe they see. Creativity is not just a useful add-on to the progression of science, its so-called method; it is a vital part of discovery and invention.  Without it science would be little more than a collection of data. These ideas are not new; many scientists have espoused them. But they are worth reiterating.

I saw my first Dali painting in the Modern Art Museum in Stockholm in 1980 (Dream caused by the Flight of a Bee around a Pomegranate a Second before Wakening up, 1944) and not long after Edvard Munch’s ‘The Scream’ in Oslo.  Both left lasting impressions – I still remember them, that’s got to count for something.  Both express elements of the human psyche, whether it’s dreams and a subconscious yearning for something, or a visceral response to angst. I’ve seen a few Dali works since then, but sadly no more Munch.  And for whatever reason, it’s the Dali that appeals most: the surreal, the imagination, the attention to detail, the craziness – and the science.

I’ve learned more about Salvador Dali.  He was pretty eccentric.  He had creative genius. Perhaps the two go hand in hand. I am intrigued by his perceptions of science, his sense that science could formulate hypotheses and theories that rival any other human endeavour in terms of their creativity and potential to change people’s perceptions of the world.

Dali’s artistic development coincided with some of the most exciting and influential scientific discoveries of the 20th century: relativity changed people’s perceptions of space and time, quantum mechanics challenged our intuition about place and states of existence, the structure of DNA permits us to look at the foundations of our physical being, and the atom bomb which destroys it.  Dali liked to read about the science of the day and the scientific debates centered around Relativity and Quantum Mechanics. He read Einstein, Schrodinger and Stephen Hawking.  His library had many science books and journals.  He annotated most of them. He was conversant with Freud’s psychoanalysis.  Dreams and the subconscious underpin his surrealist paintings. To me (admittedly naïve) there is a constructive tension between his portrayal of the surreal, subconscious world and his science.

In The Persistence of Memory (1931), perhaps one of his best known paintings, there are structural links among the landscape, the sea, and time, and imagined links to the dreaming person.  Perhaps the bendy, soft clocks reflect a perception of time not as a linear record but as it is described by Relativity. I also wonder whether there is an allusion to deep time in a geological-cosmological sense, where eons are beyond normal comprehension and distort our everyday understanding of time. Even more fascinating is the sequel The Disintegration of the Persistence of Memory (1954) where objects are broken into their ‘atomic’ components, or perhaps broken apart by the destructive force of the atom bomb (it wasn’t that long after the cessation of World War 2).

For Dali, DNA represented immortality, in part because it is the genetic foundation for humanity, but also because codes are passed on from ancestors to future generations.  His outstanding work with this theme is a homage to Crick and Watson, the co-discoverers of DNA –GALACIDALACIDESOXIRIBUNUCLEIC-ACID (1963) that the Dali Museum describes as the “cycle of life, death, and resurrection”, a reference to the generational passage of genes where “the muscles in God’s arm twist in the form of a double spiral”.

Dali was not alone in his pursuits of science in art.  Leonardo DaVinci probably tops the list as someone who not only practiced science, experiment and technological constructions, but incorporated it into his art.  There’s Roy Lichtenstein’s Peace through chemistry series and Andy Warhol’s Einstein (that I saw recently in Pittsburgh’s Warhol Museum).  Recently I came across an image by Karen Kunc Ancient Geology (1987) that depicts a volcano, strata, plate subduction and what looks like convective flow, and mountains.  It brings together all the grand, physical forces that shape the earth, but like the concept of deep time are not always easy to comprehend.

The art of science, or science of art are explorations of the universe, the mind, the physical, the imagined.  Perhaps there is no real difference in the tools of the trades – a paintbrush, a microscope, or a lens through which we see things.  Whatever it is that dictates discovery can be applied to both; the logic of analysis can be used by scientists, artists and their audiences.  Should these ideas be conveyed to students of science?  Sit them in front of any art piece, any mathematical equation, a beach or rocky outcrop with fossils (in that order) and ask them what is common to all three; what is it that helps us understand our world.  We begin with images (imagination) and create ideas (creativity).  Understanding will follow.

Did Dali contribute anything to the broader pursuit of science?  Perhaps not if we think only in terms of a white lab-coat kind of science.  But Dali did contribute wonderful visual images of some complex scientific ideas and theories, images that create in the mind’s eye ways of seeing the world through the lens of relativity, deep time and DNA.  Scientists need these kinds of images no less than anyone else.