You are here: Planet Earth and Beyond » How about floating this idea in your classroom?

How about floating this idea in your classroom?

Argo floats are a very cool technology that measures temperature and salinity in our oceans. We need this information to help us with climate, weather, and ocean research.

Argo floats are also a fabulous way to engage our budding scientists with the Nature of Science in the classroom through investigating, gathering real-time data, relating concepts of buoyancy and circuits with simple science experiments and learning more about how Argo floats work.

Argos are like underwater robots. There are over 3800 of them in our oceans! They float at a depth of 1000m (1km) for 9 days, then sink down to a depth of 2000m (2km) on the 10th day before they come up to the surface. On its way up, an Argo float measures temperature and salinity through the water column. Once it's on the surface, it transmits that data to a satellite and then repeats the process, sinks back down to 1000m, spends another 9 days drifting around, following the ocean current. 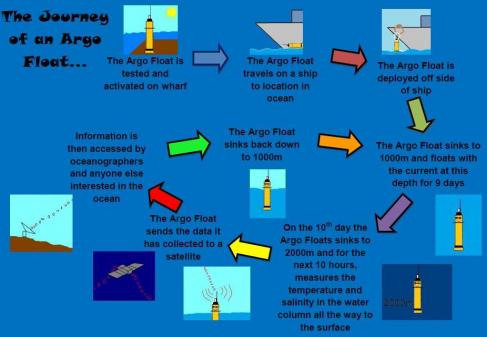 The buoyancy of an Argo float is controlled to make it rise or sink. This is done by pumping oil between internal and external bladders. As the volume inside each bladder changes, they change their density. 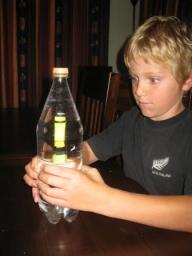 A Cartesian diver works on similar scientific principles. By making these in the classroom, students get to grips with the concepts of density and buoyancy and how they are applied to an Argo float. 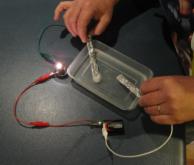 As Argo floats measure salinity by making saltwater circuits, students investigate the conductivity of saltwater, and develop an understanding of how the amount of salt in a solution impacts how much electrical current flows through the circuit.

How about 'adopting' an Argo float with your class?

Argo floats measure salinity in a very similar way. Water passes through a cell on the float that records the conductivity and then converts this into a salinity reading.

This application will put the location of all Argo floats (with their WMO ID numbers) on a Google Earth globe. Once installed it will update itself automatically when you start Google Earth. You can click on any float and get a lot of information about that instrument. Install the Google Earth Argo Application and select for yourself a float of your choice to follow. There are plenty to choose from all over the planet.

It may take just a little while to come up but you will end up seeing the Google Earth map with lots of green dots all over it! These are the Argo floats. The brighter the colour, the more recently it has surfaced. 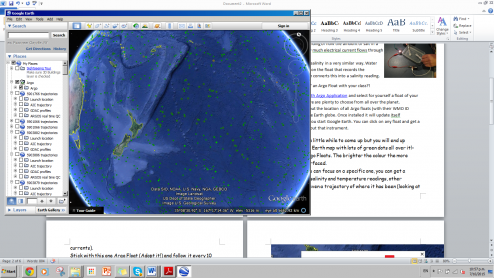 If you zoom in, you can focus on a specific one. This enables you to get a profile of it- its real-time salinity and temperature readings, other information, and even a trajectory of where it has been (looking at currents).

Stick with this one Argo float (adopt it!) and follow it every ten days.

There is now even a tab on the Google Earth Application which allows you to add your class details to the Argo float you have adopted. Just follow the directions under the "Adopt" tab. 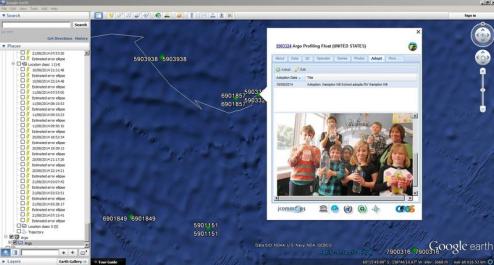 Make comparisons between one in the Southern Ocean, one around the equator and one in the north. 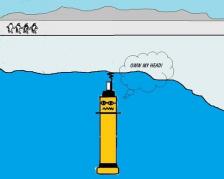 From early autumn to late spring every year, Antarctica’s sea ice almost doubles the size of the continent! This means though that Argo floats in this area get caught under the ice. If they hit or rub up against floating ice they can be damaged or destroyed.

So they avoid the ice (sounds like a good plan!) 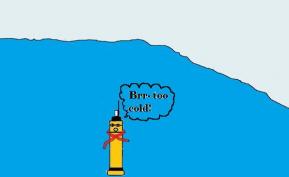 There are especially designed ice-sensing floats that check the ocean temperature each time they ascend. If the temperature gets very close to the freezing point, the float will stop heading towards the surface at 5-10 m depth and go back to its parking depth, and try again 7-10 days later. The float stores its profile data in memory. There is enough memory in this type of float to store as many as 68 profiles (although it is usually doesn't need to store more than 40 profiles between contacts with the satellite) Data transmission through the Iridium system is quite fast and each profile can be uploaded in no more than 2 minutes.

These are a number of ways that you can use Argo floats as a context for teaching the Nature of Science, as well as concepts in the Planet Earth and Beyond and Physical World strands.

As well as these, there are integrated links with literacy. I have had some rather ‘reluctant’ writers produce some marvellous examples of procedural writing about how to make a Cartesian diver. Others have drawn fantastic diagrams of Argo floats with labels and explanations of how they work.

How about floating this idea in your classroom?
Categories