You are here: The Living World » Forgotten fungal facts!

Peter Buchanan, a mycologist with Landcare Research, believes that fungi, a kingdom of life larger than that of plants, are underappreciated – in both the damage they can do and their vital role in the fundamentals of life itself. 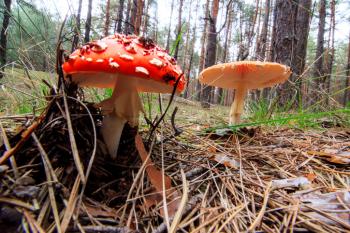 Technically, Peter Buchanan’s job title is systematics science team leader at Landcare Research/Manaaki Whenua, one of seven Crown Research Institutes in New Zealand tasked with “[achieving] the sustainable use of land resources and their ecosystem service[s]”, among other goals. But he’d rather be called a mycologist – someone who studies fungi.

Peter leads a team that maintains a collection of fungi specimens, both dried and live, which has been built on since the 1920s and includes more than 100,000 specimens. It’s been estimated that only two thirds of New Zealand’s fungal biodiversity has been documented to date.

Many of the specimens are of species native or endemic to New Zealand, but some are from the Pacific Islands and other places. There are actually two collections: the New Zealand Fungal and Plant Disease Collection (also known as the PDD Fungarium), and the International Collection of Microorganisms from Plants (the ICMP), which contains around 10,000 living strains of fungi suspended in liquid nitrogen.

The purpose of the collection is to document the diversity of New Zealand’s fungi – and our total biodiversity – and improve and add to our knowledge of the impact that fungi have on agriculture and biosecurity.

New Zealand’s fungi and plants have both harmful and beneficial relationships, says Peter, although much of the destructive side of these relationships is caused by the way we grow the useful species that we use, for food or otherwise, and mainly comes back to the fact that we grow plants commercially in monoculture.

On the one hand, fungi are responsible for most of the diseases that ravage crop species, yet on the other, most plants couldn’t grow if not for a species of fungi - usually multiple species - that help them.

Peter says that on the negative side of the plant interaction with fungi, he and others working on how best to protect our crops from the ravages of fungal infections are constantly playing catch-up.

“Many millions of dollars are spent every year on fungicides to try to control diseases – facial eczema is a fungal spore disease that directly affects livestock animals, for example, that we can’t get rid of. All crops that we grow have fungal diseases.

“We’re often playing catch-up. especially with organisms that come in from overseas. It’s a big challenge to eradicate something once it's here, so the response often becomes one of management. These things don’t make headlines, but the horticultural and agricultural industries are in a constant battle to try to control them.

“One of the industries we have a close relationship with is the grape industry. We’ve been researching for decades the fungal rot called Botrytis that many types of grapes suffer from. Growers spray for it every year and the organism actually mutates so that the fungicides need to be reformulated regularly.

“We bring it on ourselves to a degree. But it’s hard to change … we grow things in monocultures, and fungi spread by spores: if the nearest plant is another of the same host species, it’s easy for the fungus to spread.”

Peter says that most plants have a symbiotic relationship with a particular type of fungus that has evolved to complement it. This relationship goes back to the time in Earth’s history when plants first colonised the land about 700 million years ago. It does appear, however, that fungi are really doing plants the bigger favour, as they didn’t need plants for more than 600 million years before that. Back then, what we know today as humble fungi were often the size of today’s trees, called prototaxites.

The reason for this symbiotic relationship is mutual benefit. Fungal filaments intertwine with the root structures of plants and are able to extract some of the sugars that are created by leaves. Fungi contribute to this bargain by bringing water and minerals to the plant’s roots.

In fact, says Peter, most plants will grow very poorly if grown in sterile soil. But introduce those species of fungi which have evolved to complement a particular plant species, and watch it take off.

One example that’s important to New Zealand would be Pinus radiata, the introduced pine tree that is a cash crop here. It is, of course, an introduced species, meaning its fungal partners aren't native either. Familiar to anyone who’s walked in a pine forest is the red toadstool with white spots: a species of fungal partner that is introduced to the pine tree saplings in the nursery before planting.

Despite the fact that the fungi part of Eukaryota – the domain of life that includes all animals, plants, fungi, and protists – is a lot larger than plants, Peter believes we tend to take this unique form of life for granted. The majority of fungal species that we have here are native or endemic to New Zealand, and specialists from around the world come here to study them.

“I think that few people are even aware that fungi are a separate kingdom of life, or that they play such a crucial role in our ecosystem.

“There are a number of things that fungi do that I think we take for granted. One of the main ones is the ‘ecological service’ they provide: fungi to a large extent are responsible for recycling nutrients from anything dead back into the system. They are the primary agents of decay.”

Another fun fungi fact: they are actually the largest living things on the planet. Don’t be fooled by the fragile-looking mushroom: this can be just the fruiting body of a much larger subterranean organism that can be kilometres in size. Specifically, a specimen of honey fungus living in Oregon’s Blue Mountains, which measures 3.8 kilometres across and could be thousands of years old, is thought to take the overall title.

Fungi might be about to provide the key to eco-friendly batteries, and are also helping scientists to understand the nature of evolution.

Slovenly food hygiene has, in fact, gifted to our species a couple of the things for which we’ll unquestionably be remembered: blue, gorgonzola and camembert cheeses. Oh, and antibiotics, those things preventing the dark ages from making a comeback – so far.

Of course, mould giveth and taketh away in equal measure it seems. Rather a lot more taketh, you’d likely say if you were one of the ‘witches’ hung in Salem, Massachusetts, in the late 1600s. A form of mould poisoning called ergotism, which may have come from tainted rye bread,has been fingered as the possible cause of the ‘witch’-like behaviour that so alarmed the general populace. Ergotism has some pretty weird effects on one’s central nervous system: intense hallucinations, spasms, fits, and psychosis – symptoms thought at the time to be consistent with possession.

Though you too may have looked heavenward in anguish at the mould you didn’t spot on your toast, in the middle ages ergotism really was seen as punishment from above – in this case God seems to have preferred his pound of flesh in the form of an amputated limb: gangrene was a common consequence of the disease. Given ergotism’s mind-altering properties, contemporary scholars may have wondered just how many historical events involving odd behaviour happened because someone didn’t look closely enough at their toast.

Back in the ‘pro’ column, which as we’ve seen is clearly winning (think cheese), fungi might also prove to be the key to batteries that don’t poison the planet.

Professor Geoffrey Gadd of Scotland’s University of Dundee and colleagues have been experimenting with the ability of fungi to transform metals and minerals in useful ways. Apart from creating eco-friendly batteries, fungi have also been demonstrated to stabilise toxic lead and uranium, for example.

In the new study, Gadd and his colleagues incubated a form of mould called **itals** Neurospora crassa** in media amended with urea and manganese chloride (MnCl₂) and watched what happened. The researchers found that the long, branching fungal filaments (or hyphae) became biomineralised and/or enveloped by minerals in various formations. After heat treatment, they were left with a mixture of carbonised biomass and manganese oxides. Further study of those structures show that they have ideal electrochemical properties for use in supercapacitors or lithium-ion batteries.

N. crassa, it turns out, is a really helpful mould, as long as you keep it away from your lunch: it’s also being used to help scientists understand how species arise and evolve, and how cells and tissues change their shapes in different environments. So, kids, if you’re reading this, next time your parents go ballistic about the nasty contents of your forgotten lunchbox, you can simply tell them that you are, in fact, part of a crowd-sourced science experiment to understand the very building blocks of life.

Fungi are living organisms that are distantly related to plants, are more closely related to animals, but really are rather different from either of those groups.

Fungi can be recognised by the following five characteristics:

This article was originally published in NZ Science Teacher's annual journal 2016. Peter Buchanan has since pointed our a number of errors in the story, which have been corrected here. We thank Peter for his patience!