You are here: The Physical World » Slapstick and science: making physics fun

Series creator JOSEPH HERSCHER describes how Jiwi’s Machines came to life, and why a teaching unit was so important to the project. 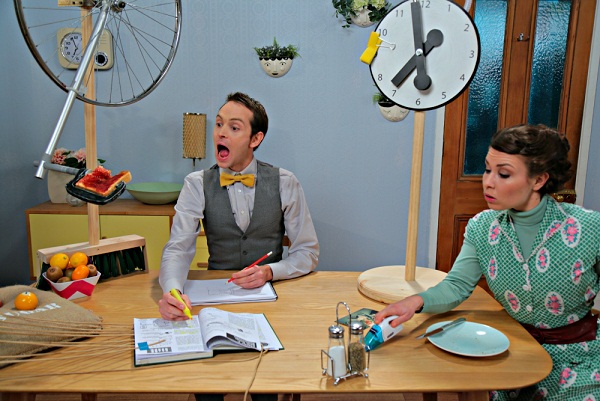 I made my first chain-reaction machine when I was five years old. I called it “The Lolly Machine”. It was a box with a tube for storing my candy. Another machine solved the problem of how to turn the pages of a heavy book while I was reading in bed. This childhood passion was rediscovered in my early 20s when I built a contraption that spanned my entire flat in a three-minute obstacle course culminating in a hammer smashing a chocolate egg. Not knowing what to do with it, I filmed the thing in action and posted it online. It quickly went viral.

Soon came a feature in The New York Times and an appearance on Sesame Street. My videos racked up 12 million views online and I began doing workshops with kids all over the world. Before I was even aware of it, my job in software development had been sidelined for a contraption-building career.

There’s a rich history of chain-reaction machines, especially over the past century. You’ve seen them in films like Chitty Chitty Bang Bang, Wallace and Gromit in The Curse of the Were-Rabbit, Pee-Wee’s Big Adventure and Back To The Future. They are most commonly called Rube Goldberg machines, named after the New York comic artist who drew cartoons of complicated contraptions that ultimately perform a simple – often laughably simple – task.

I’ve always been amazed at how a room of 50 children goes silent when I play one of my videos. When I started doing workshops I was blown away by how intensely engaged the kids were. Their excitement was palpable, especially when everyone came together at the end to run the giant machine we had created.

Of course, chain-reaction machines are absolutely laden with science. Their educational potential is undeniable. I started wondering if there was a way to combine my machines with educational resources, and also with my third passion, storytelling. Jiwi’s Machines was born: the world’s first educational chain-reaction sitcom!

Jiwi’s Machines is a four-episode comedy web series that follows my character, Jiwi, as he builds complicated contraptions – such as a breakfast delivery machine – to make his life easier. Unfortunately, his inventions cause chaos for those around him, especially his sister June. Accompanying the web series is a bonanza of extra science videos where kids can explore the workings of important machine elements like levers and pulleys, wedges and screws, and wheels and axles.

We made the series last year with funding from NZ on Air’s innovative Digital Fund – they liked the focus on children and science – and a location provided by Auckland’s MOTAT (Museum of Transport and Technology). MOTAT turned out to be the perfect location partner because of their natural interest in physics and simple machines, as evidenced by their excellent Welcome to the Machine exhibition, which we used in some of our science videos.

Since we launched the series in November last year, more than 100,000 Kiwis have watched Jiwi’s Machines online. I’m beyond happy that the feedback I get from parents and teachers focuses on how the series “makes learning fun” with one mum happily reporting that the show “just kept one of my kids entertained for a full 30 minutes; that’s no easy feat!”

Chain-reaction machines are intentionally inefficient and playful. The best way to build them is to give kids everyday objects and let them play with them, in an undirected way. A cup is not just a cup, it also rolls. Once kids have made interesting kinetic discoveries, they can put on their problem-solving hats and figure out how to connect them, with a more goal-focused approach.

But it’s the initial undirected play that is often overlooked in education. I believe it’s a key mindset behind the best scientists and innovators. 3M lets all their employees use 15 per cent of their paid time to chase rainbows and hatch their own ideas, and it famously led to the invention of a sticky-backed piece of paper: the Post-it Note.

That’s why, for the 2016 school year, we have launched 16 free, hands-on teaching resources for years 5 to 8 (8 to 13-year-olds). Created by educator extraordinaire Brigitte Glasson and designed by celebrated illustrator Nic Marshall, they are guaranteed to get kids science-obsessed. 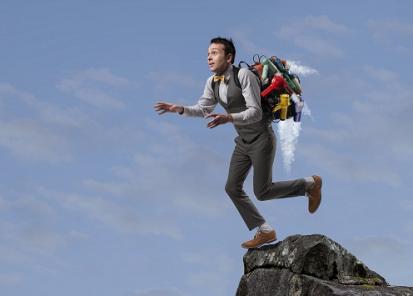 We wanted to create these teaching resources with play in mind. Luckily for us, Brigitte Glasson is not only up to date with the nature of science in the curriculum, she also has a great sense of humour.  She has created a wonderful set of classroom activities, using a hands-on approach to model what 21st century science learning can look like.

It works like this: kids watch an episode of Jiwi’s Machines, followed by one of the short, entertaining science videos. Teachers can then use the accompanying lesson plan to get their students playing with the science in the machines.

So go ahead and get playful in the classroom, because you never know what might happen. Somehow, I’ve gone and made a career out of mucking around with ordinary objects!  The content in the Jiwi’s Machines teaching unit relates to the Physical World achievement aims of The New Zealand Curriculum, and investigates science concepts such as simple machines, friction, gravity, transfer of energy, elasticity, and balance. Although we have targeted the teaching unit at Years 5 - 8, it is entirely suitable for Years 9 - 10 as it fits with their Nature of Science achievement aims. Ultimately, our goal with the Jiwi’s Machines teaching unit is for teachers to let kids be hands-on with their science.