You are here: E-learning » Using 3D printers to teach biology

The world of 3D printing is wide open with possibility for teaching biology, writes MICHAEL WILSON. 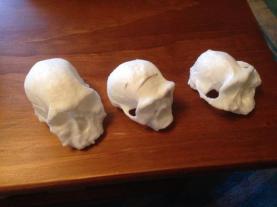 As 3D printing became ‘mainstream’, and armed with an idea of being able to print scientific models using plastic, at the start of the year I began researching how to build a personal 3D printer that I could easily use to make models for my teaching.

My initial plan was to print sets of hominin skulls as they were expensive to purchase, and I wanted to have class sets of a smaller scale. But my ideas rapidly grew as I started my journey into 3D printing.

This article will go through the basics of what 3D printing is and how I am using it to help my teaching of both science and biology.

3D printing in its most basic sense is printing a 3D object at very thin (0.1mm) layers at a time called ‘slices.’ An object is built up slowly as layers are printed on top of each other. The X and Y axis, which is the flat axis, is printed on by an extruder that melts a fine bead of plastic in the shape of that slice.

A stepper motor usually connected to belts move the extruder sideways and back and forth. At the completion of the layer, a small stepper motor lifts the extruder up a height of 0.1mm and the next layer is printed. After a couple of hours, you can have a half-size skull printed that is instantly usable. Most slicer software hollows out the model and fills it in with a structure such as honeycomb that makes the models strong and super light. 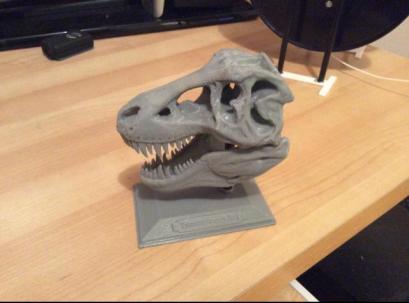 The most common plastics used are PLA and ABS. PLA, or polylactide, is biodegradable and melts with a sugary smell, and ABS (Acrylonitrile butadiene styrene), which is a form of styrene, melts with a burning plastic smell.

The plastic enters the machine in the form of a solid tube called filament and another motor with a gear attached pushes it towards the heated part that melts it. I choose to use PLA as it is both safer and easier to use and does not warp as easily.

There are lots of scientific 3D models already made and a quick search on a website such as www.thingiverse.com shows many that are ready just to print without modification. The format you are looking for is .stl – most of the 3D printers (especially open source) use this format. Before you can print a 3D model, you need to use a software program to slice the .stl file into layers and save it into your printer’s gcode language, which is the instructions for it to move and extrude plastic in a particular way. What powers the printer is an Arduino board, which is a low-powered computer that drives the motors and what is called the ‘hot end’ (the part that melts the plastic.)

Now, 3D printing can be as easy as buying a printer online. These ready-made printers can range in value from two to ten thousand dollars and often rely on the purchasing of plastic in cartridges, much like a paper printer. By going this way, you are limited in what you print with and it is expensive. The pluses are that you do not need to understand how to build a printer or really how it works. As 3D printing technology gets simpler, these turnkey options will be more accessible to schools. At the opposite end of these are open source printers that the online community have been developing for a number of years and come under the name of RepRap.

This is the method I chose to use because of the low cost, and as a science teacher, I wanted to be able to explain to my students how they worked. RepRap is the first general-purpose self-replicating manufacturing machine in that some of the actual machine is 3D printed itself. RepRap 3D printers come in two main styles: the Prusa box style with a rectangular print bed, and what is called the Rostock style, which has three arms and prints on a triangle-shaped bed. I chose the Prusa style as it gave me the most flexibility in model shapes. 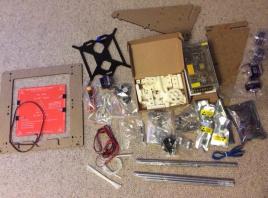 I will not go into the actual steps of building the printer. However, the RepRap Wiki is a great place to start and many designs are now able to be purchased in kitset form with excellent instructions. I would recommend the Czar Prusa I3 as a good first printer and the whole package comes in at around NZ$600, including shipping.

As a biology teacher, investigating human evolution with my students requires them to identify trends in bones of our early ancestors. These trends involve skulls and bones that are often hard to find in model form. The African Fossils virtual laboratory website is a digital archaeology project that seeks to increase public knowledge about prehistory by harnessing Autodesk 3D scanning technology. 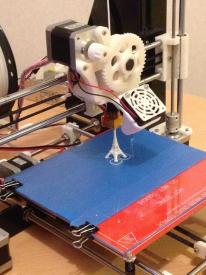 Dr Louise Leakey has taken it upon herself to find a way to make them globally accessible for educators and this is where I find the bulk of my models. If you visit www.africanfossils.org you can download the printable 3D models under each skull page.

Right: My REPRAP printer in action.

Human and fossils such as the Taung child skull are available on www.thingiverse.com