You are here: Planet Earth and Beyond » August a great month for watching other worlds

August a great month for watching other worlds

August is a great month for planet spotters, including those possessing only the tools they were born with: all five ‘naked eye’ planets will be visible in the early evening sky this month. There will be also be several astral highlights as well, as stars like Antares and Vega make their way across the sky. 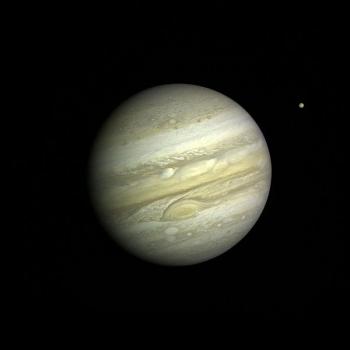 Venus - the ‘evening star - sets in the west an hour after the sun at the beginning of the month, and by the end of August will be hanging around for about two hours.

Mercury, Venus and Jupiter will appear low in the western evening sky, and will move across the horizon as the month continues. Mars and Saturn will appear north of overhead, near the star Antares - the 15th brightest star in the observable cosmos, which is some 550 light years from Earth. It’s also fairly bulky, as stars go: if you plonked Antares at the centre of our own solar system, it’s outer edge would lie between the orbits of Mars and Jupiter, having a radius 880 times that of our own tiny little life-giver.

Antares is sometimes called ‘the heart of the Scorpion’, because it’s the brightest star in the Scorpius constellation. It’s been a prominent star in ancient lore around the world: along with Aldebaran, Regulus, and Fomalhaut, Antares makes up the ‘Royal stars of Persia. Ancient Persians believed these stars to be the guardians of the sky.

Here in Aotearoa, Antares played a role in a quite different mythology: along with the ‘tail’ of what in the west is known as Scorpius, Antares forms fishhook of Māui, in Maori star lore.

Jupiter will appear higher in the western sky, and has a golden colour to the naked eye. The largest planet in our solar system will set progressively earlier as the month goes on: 9pm at the beginning of the month, and 8pm before the end.

Toward the beginning of the month, Mars, Saturn, and Antares will appear to form quite a neat isosceles triangle, which is of course a line of sight illusion: these bodies are absolutely nowhere near each other!

During August, the Milky Way galaxy, which we can see as a stripe across the sky, because we are looking toward the edge of the plate-like shape that is our galaxy, will span the sky from northeast to southwest.

Check out a video of the Milky Way traversing the sky here.

Click on the image below to download a PDF of a handy chart that you can use to identify the various planets and stars that will be prominent in the sky this month - courtesy of the Royal Astronomical Society of New Zealand.

August a great month for watching other worlds
Categories