You are here: The Physical World » More than authentic learning: Rū Network

The Rū Network is a group of schools around the country that are equipped with seismometers, which they use to gather earthquake data that is shared in real time via an online portal. It’s the perfect way to give kids an authentic context for getting stuck into earth science, says University of Auckland phd student James Clarke, who helps administer the programme. 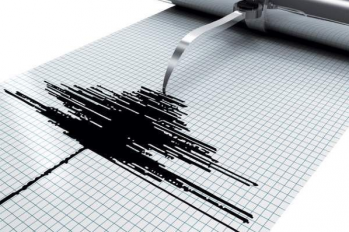 This network of seismologically active schools, so to speak, is named after the Māori word for earthquake - rū - which itself is derived from Rūaumoko, the Māori deity associated with earthquakes (also known as Whakaruaimoko, Rūamoko, Rūaimoko, Whakarūamoko, Rūaimokoroa). The programme, designed to bring schools together around the study of what is a very relevant context in New Zealand, has been around since 2014, and comprises 23 stations - from James Hargest College in the far south, to Rodney College in the far north.

Although there are plans to utilise the data gathered by Rū Network schools in a more ‘real world’ way, at the moment the programme is first and foremost an outreach initiative, and a way to facilitate learning around earth science and physics. The study of something like tectonic plates is made so much more engaging when students are actually detecting and measuring their interaction themselves, says James.

“When the kids are using the seismometers themselves, that provides a real stimulus to examine things like the different kinds of waves associated with earthquakes, which leads onto stuff, for example, like class-based exercises in earthquake location. The aim is to increase interest and knowledge in earth science.”

The seismometer that Rū Network schools use - called the TC-1 - is provided by Auckland University, and is a robust yet surprisingly simple device. Setting up the device, says James, leads to learning in itself: essentially, a seismometer is a magnet inside a coil, which of course can be the basis for physics learning.

The motivation behind the programme, says James, has several aspects: firstly of course, New Zealand is a country that experiences a huge amount of tectonic activity - earthquakes pose a clear and present risk here. So anything that can encourage awareness and knowledge can only be a good thing. That risk also means that New Zealand needs lots of passionate earth scientists, to help lead the world in the study of tectonics, and therefore hopefully pioneer mitigation of the worst effects of earthquakes.

Schools can apply to get on board by contacting the Rū Network, and detailing via email how they plan to use the seismometer and the system behind it in their curriculum. Students input into the application process is also welcomed. Once accepted, James pays a visit to the school, and helps students put together the TC-1, and kick-start the learning that surrounds it.

More than just an authentic context

Chris Manuel is deputy principal of Westland High School, and is leading his school’s involvement with the Rū Network.

In 2009, Chris had a fellowship with the Royal Society, where he was looking into town resilience to major disasters. Of course, Hokitika is right next door to the Alpine Fault, which has a 30 per cent chance of rupturing in the next 50 years, which is considered a high probability. This rupture will “produce one of the biggest earthquakes since European settlement of New Zealand..” As part of his work with the Royal Society, Chris ran a Shake Out event, a national web-based earthquake drill programme. So Chris knows that earthquakes are more than just an authentic learning context in his hometown. He thought it would be a great idea to get involved with the Rū Network, and connect his students with the means to at least partially demystify earthquakes.

“Basically it means that we can watch earthquakes live with our seismometer. There was a quake in Vanuatu a few days ago in fact, that we picked up. Of course we didn’t even feel it, but the instrument picked it up.

“We were able to detect the wide separation between the p-waves and the s-waves, so we were able to establish how far away it was.

“The fact that we’re recording these events right here in the school, and we’re sending it to a nationwide database, means we’re able to see in real time what’s going on right across the country.

“If you look at the Live Rumblings page, you can see that using data from other schools, we can establish, by measuring the distance between p and s-waves at various sites, exactly where the epicentre of a quake was. That’s really powerful for the kids I think.”